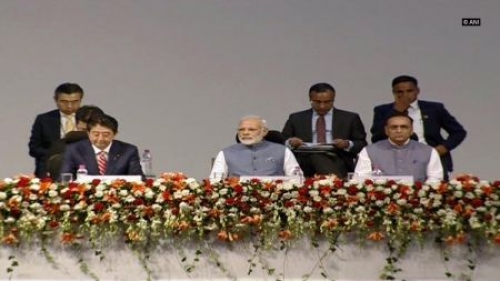 Ahmedabad (Gujarat) , September 14 : Prime Minister Narendra Modi on Thursday highlighted several aspects of India-Japan partnership and said that 21st century is Asia's century and the growing convergence between Japan and India on strategic and economic issues has capacity to stimulate the global economy.

Speaking at the India-Japan Annual Summit in Gujarat, Prime Minister Modi said, "When I first visited Japan as Chief Minister of Gujarat, I had said that I want to see a mini Japan in Gujarat. Today, that dream has come true."

"Japan can benefit tremendously with the size and scale of our potential and skilled hands that India offers and 21st century was of Asia's and it had emerged as the new centre of global growth."

The Prime Minister said that four locations have been finalised in Gujarat, Rajasthan, Andhra Pradesh and Tamil Nadu for development of Japanese Industrial Townships.

Hailing the strength of India-Japan friendship and trust, the Prime Minister invited more Japanese people and companies to come, live and work in India.

Pm Modi said, "Over the last three years, we have worked very hard on the front of Ease of Doing Business. A series of administrative reforms have significantly improved the business sentiment in the country. These reforms and initiatives are all aimed at preparing India for the 21st century. They are aimed at transforming the country and making a New India. Powered by the energy of our youth, we are positioning India as a global manufacturing hub. For this purpose, we have launched the 'Make in India' campaign. We are also developing India into a knowledge based, skill supported and technology driven society."

Prime Minister Modi said a series of administrative reforms have significantly improved the business sentiment in the country.