Peranbu Movie Review: An elegance in every standards 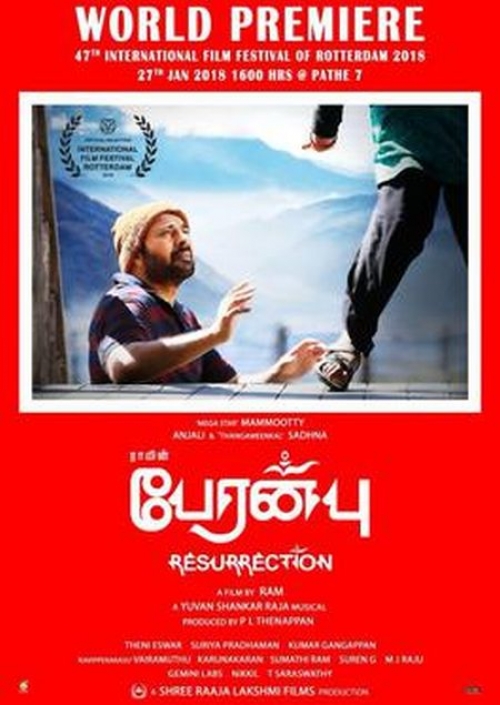 By Pradeep Peter, Kochi, Feb 1: Mammotty, probably one of the best actor in Indian cinema was lacking an opportunity to show his class for somewhat a long time now. It ends with Peranbu.

Director Ram, who always opted for sensitive subjects make the best out of Mammooty with this classic. It is amazing how a Superstar of Mammooty's stature quickly sheds the glitz when given a challenging script.

Mammootty plays a cab driver who returns from Dubai to find that his wife has eloped with another man.

Before long after the movie starts, you realise there is much more to the story of a single father Amudhavan (Mammootty), whose whole world is his daughter Paapa (Sadhana). Amudhavan has to look after his teenaged daughter with special needs after his wife deserts him.

The trouble starts when the father and the daughter are denounced by the kin and are forced find a dwelling hat would not make a burden to others.

Peranbu is divided into more than 10 chapters and each one describes a phase of the father-daughter relationship, drawing parallels between life and nature. Some of the chapters are titled - 'nature is brutal', 'nature is love', 'nature is full of surprises', 'nature is unpredictable', 'nature is ever-evolving' and so on.

One must give it to Ram for his extraordinarily sensitive portrayal of a father-daughter relationship. Ram, as a director, has an easy way of slipping in the details and takes you through the emotions of each character step by step.

Sadhana is not reduced to a caricature. In fact, she is just brilliant as a girl lost and longing for a mother.

Frames capture the charming beauty of nature in the first half and in the second half it encapsulate the greyness in the urban texture.

Yuvan's simplistic melodies are also a plus.