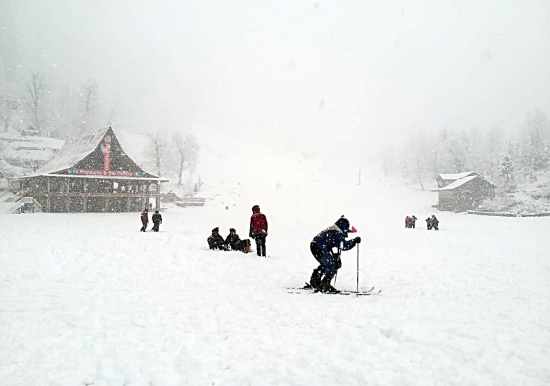 Shimla, Dec 12 : Picturesque tourist spots Shimla and Manali in Himachal Pradesh on Thursday experienced season's first snowfall. Nearby spots of Shimla too were wrapped in a blanket of snow, bringing cheer to tourists.


Some of the tourist spots in the upper Shimla district were cut off after snow piled on roads, officials said.

The 'Queen of Hills', as Shimla was fondly called by the erstwhile British rulers, got snow in the evening. It saw a minimum of 2.8 degrees Celsius, while the maximum stayed at 5.9 degrees, a fall from Wednesday's 13.3 degrees.

As news of the snowfall spread, tourists started reaching Shimla and its nearby places like Kufri, Mashobra and Narkanda.

"This weekend we are expecting a good rush of tourists," a Shimla-based hotelier said.

Hills overlooking Manali like Gulaba, Solang and Kothi have been experiencing moderate snowfall since late Wednesday, said the Meteorological Department official here. Manali, which saw a low of 1.8 degree, experienced more than four cm of snow.

"The higher reaches of Lahaul-Spiti, Kinnaur, Kullu, Shimla, Mandi, Sirmaur and Chamba districts have been experiencing snowfall, while mid and lower hills are experiencing rain," the official said.

Kalpa in Kinnaur district and Keylong in Lahaul and Spiti also experienced snowfall. They saw a low of minus 0.9 degrees and minus 3.9 degrees Celsius, respectively. Dharamsala recorded a low of 7.6 degrees Celsius.

Traffic movement beyond Dhalli, 10 km from Shimla, was suspended partially as a large stretch of the Hindustan-Tibet Road was under a thick blanket of snow.

The Met Office said a western disturbance -- a storm system originating from the Mediterranean-Caspian Sea region and moving across the Afghanistan-Pakistan region -- would remain active till Friday, bringing more rain and snow.

Like This Article?
Shimla, Manali get season's first snowfall