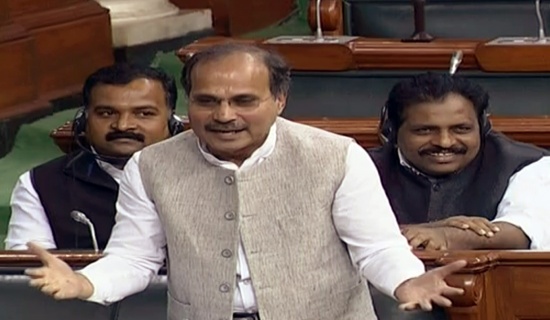 
Chowdhury, however, didn't render apology despite the issue stretching from the question hour to the zero hour and causing an adjournment. "You (BJP) are only making a mountain out of molehill," he said.

When the House reassembled after its first adjournment, Sanjay Singh (BJP) and Parliamentary Affairs Minister Pralhad Joshi launched an attack on Sonia Gandhi stating that the top Congress leader was a "foreigner".

After minutes of heated arguments and ruckus, Joshi requested the Chair to conduct legislative business as Chowdhury didn't directly accept that he was wrong.

The Congress leader reiterated his remark in the House on Monday, when a ruling alliance member raised the issue at the question hour about his Sunday's "infiltrator" remark made outside Parliament.

"Modi and Advani are infiltrators," the Congress leader said, but the exact context was not clear. Reacting to it, Petroleum Minister Dharmendra Pradhan said, "Who is infiltrator will be in the open soon."

"It's also the manifestation of the Congress side of federalism. I condemn his statement. He (Chowdhury) comes from West Bengal. He is the leader of the Congress Party. Can we call him infiltrator? What is he talking about? He should talk responsibly.

"Let him understand. We are forced to draw the inference that the Congress led by infiltrators will obviously perceive the others in another way. This party's leader is infiltrator. What they will tell about our party," Joshi said.

Joshi, however, continued speaking on the issue, saying, "You should withdraw the statement made against the Home Minister, who created a history by repealing Article 370 from Jiamp;K under leadership of Modi, and the Prime Minister."

"There should be an unconditional apology," Joshi said.

The Congress leader later said, I openly accept that I along with my parents were from Bangladesh. "When they came here they didn't have proper documents. We have been residing here since Independence. We didn't think of preparing documents as we thought that this was our country. Now, if anyone would say I am an infiltrator, I would be an infiltrator. What will I do?"

He requested Joshi to hear him out and then seek his apology.

As the row continued, the Lok Sabha Speaker adjourned the House till 2.15 p.m.

Like This Article?
Row in LS over Adhir calling Modi, Shah 'infiltrators'