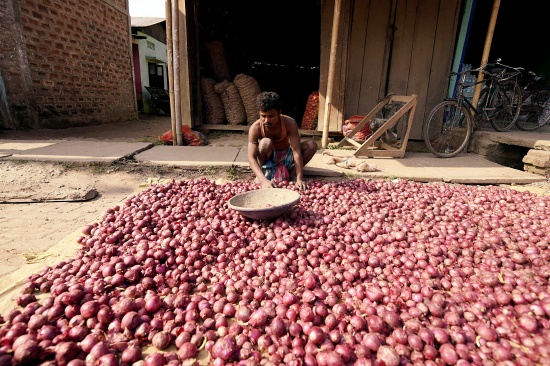 New Delhi, Dec 2 : Concerned by the rising prices of onions, the Centre on Monday asked the states to impose stock limits on traders and to ensure strict action against hoarding.


In a review meeting with Committee of Secretaries on onion prices, Cabinet Secretary Rajiv Gauba directed the states to maintain considerable buffer stocks, impose stock limits on traders and to ensure strict action against hoarding.

The Cabinet Secretary directed the states that the overall availability of the onions has to be beefed up, considering the temporary shortage, to stabilise the prices. The Centre has already taken a decision on not allowing the export of onions during the current season.

In a video conference held with the Chief Secretaries of the 11 major onion producing states, the Cabinet Secretary was briefed about the various steps being taken by the states to tackle the rising prices of onions.

Gauba said that the Union Government has approved the import of 11,000 metric tonnes of onions from Turkey to tide over the situation. The deliveries are expected from the last week of December.

This is in addition to the decision of the government to import 6,900 metric tonnes of onions from Egypt. The deliveries are expected from second week of December.

The Cabinet Secretary also directed the states to utilise their Food and Civil Supply Departments to procure and distribute onions at reasonable prices.

Like This Article?
Centre asks states to impose stock limits on onion traders