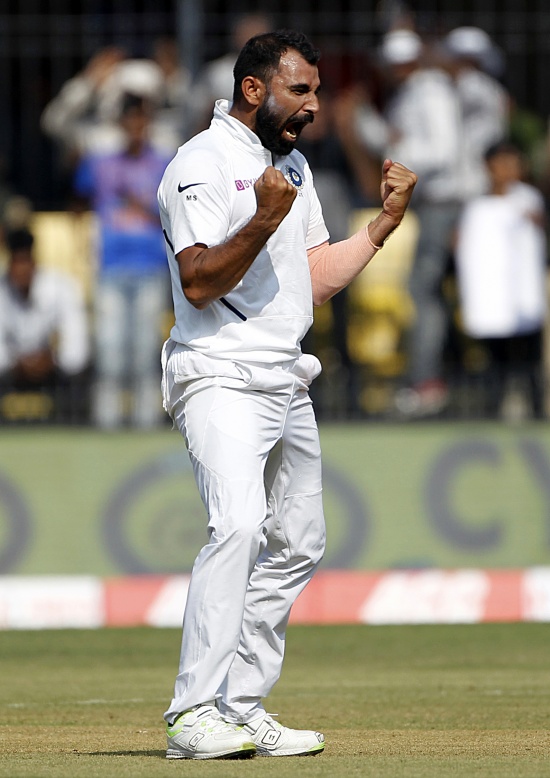 Indore, Nov 16 : Mohammed Shami took two wickets while Ishant Sharma and Umesh Yadav got one each as India remained firmly in control of their first Test against Bangladesh at the end of the first session of Day 3. India declared overnight with a lead of 343 and left Bangladesh reeling at 60/4 at Lunch.


Bangladesh lost their first wicket in the sixth over of the day, with Umesh taking off Imrul Kayes' leg stump. In the very next over Ishant bowled through Kayes' opening partner Shadman Islam's defence and hit middle and leg.

The visitors did not have any reprieve after that with Virat Kohli shooting his pacers at them. In the 13th over, Bangladesh skipper Mominul Haque seemingly got a lifeline when the umpire did not raise his finger for an LBW appeal off Mohammed Shami.

Kohli went for the review, however, and replays showed that the ball would have hit the leg stump. The Bangladesh captain walked for 7 and his team were 37/3 in 13 overs.

Two overs later, Shami bowled a bouncer at Mohammad Mithun which the latter could only lift straight into the hands of Mayank Agarwal at midwicket.

Mushfiqur Rahim and Mahmudullah held on after that to see Bangladesh through to lunch. The pair have put 16 runs for the fifth wicket, just four runs short of Bangladesh's best partnership so far which was between Mithun and Mominul for the third wicket. They trail by 283 runs.