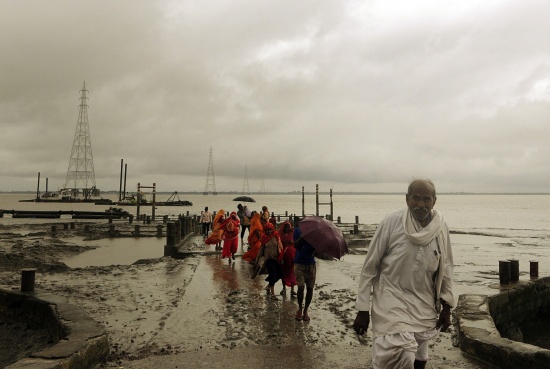 
Khejuri, Nandgram, Nayachar and Ramnagar in East Midnapore and Kakdweep and Bakkhali in South 24 Parganas districts in the state's coastal region were worst-affected, as trees got uprooted, roofs gave way and houses and shops suffered damage. Power supply was also disrupted in many areas.

Chief Minister Mamata Banerjee, who has been personally monitoring the situation along with top officials from the control room at the secretariat Nabanna, said 1,64,315 persons have been evacuated from low-lying areas on the coast.

Bakkhali was ravaged as the rain and storm snapped internet links and telephone lines, while power supply was disrupted from early in the morning. "We are operating a generator. We can provide this service till midnight as all petrol pumps are closed," said a hotel owner.

The fishermen have been barred from venturing into the sea adjoining the Sundarbans delta on Saturday and Sunday.

Hotels in the coasal tourist resorts of Digha, Bakkhali, Mandarmoni, Talsari, Shankarpur and Bakkhali have been largely emptied of tourists.

In south Kolkata's Ballygunge, a youth died when he was crushed under a falling tree. Another tree fell on a car in Regent Park area, but the occupant escaped unharmed.

Flight operations in the city's NSCBI airport have been suspended from 6 p.m. on Saturday to 6 a.m. on Sunday to prevent any damage.

Suburban train services in Lakshmikantapur-Namkhana section of Eastern Railway were halted as a precautionary measure since 7 p.m., while train movement in Baruipur and Diamond Harbour sections were disrupted after an uprooted tree fell on the railway track near Rasulpur.

The RMC update expressed apprehension of a storm surge of about one to two metres height in North and South 24 Parganas districts and 0.5 to 1 m height in East Midnapore district above the astronomical tide which is likely to inundate low-lying areas.

The maximum extent of inundation is likely to be around two kilometres over the two Parganas.