PM Modi, the master of political surprise and timing 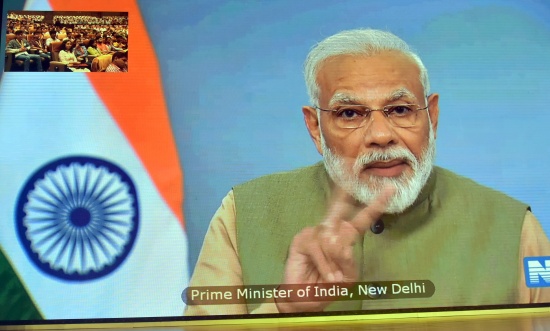 New Delhi, Nov 9 : Prime Minister Narendra Modi by far is the master of political surprise and timing and when under siege is able to manoeuvre the situation to his own advantage.


Modi has often said he likes to convert challenges and problems into opportunities.

While it was well known that the Supreme Court judgement on Ayodhya would come before the retirement of the Chief Justice Ranjan Gogoi on November 17, the timing has caught people by surprise. Most of the speculation was around November 13-15 but the judgement came on a day when the other important development was the inauguration of Kartarpur corridor. The narrative built around the judgement suits the PM though he could not have anything to do with its advancement.

It is the PM's innate sense of timing that keeps him ahead of the eight ball. The apex court will deliver three more crucial judgements next week -- if CJI should come under RTI, Rafale deal and Sabarimala -- as CJI Ranjana Gogoi retires on November 17.

PM Modi's comment at the Union Cabinet meeting earlier this week on Wednesday asking Ministers not to make any irresponsible statements on the Supreme Court verdict was an important development.

Be it favourable timing or providence, the Supreme Court judgement giving sanction to a Ram temple in Ayodhya has pushed back all talk of a debacle and ally trouble in Maharashtra and Moody's downgrade of India's sovereign ratings.

This is not a one-time coincidence.

PM Modi's style is to sway popular sentiment to the narrative he wants by unfolding a big-ticket announcement.

Before the testy Uttar Pradesh elections in early 2017, demonetization was announced on November 8, 2016 which critics say was done to weaken political opponents financially while also changing the discourse on a meandering economy and positioning Modi as a warrior against corruption and black money and a chaiwala fighting an entrenched elite class.

On the back foot after the "suit boot ki sarkar" jibes, PM Modi's economic policy has become increasingly welfarist and oriented towards the poor. The government has since then shunned anything that may be seen to be helping corporates and gone the other way with enforcement actions on NPAs, bankruptcy code for companies and zero tolerance against corruption.

In the run-up to the general election 2019, the narrative was leaning towards unemployment and the economic pain of demonetization via struggling businesses, the troubles in the informal sector and farm distress which would point a finger at the government.

However, things changed after the ambush against the CRPF jawans in Pulwama and the cross-border strikes on terror camps in Balakot in Pakistan which turned the debate into one dominated by nationalist issues.

In the early days of his second term, Prime Minister Narendra Modi seems to be in a tearing hurry. He is quickly ticking all the boxes on the main government priorities, abrogation of Article 370 in Jiamp;K, being one such item.

Like This Article?
PM Modi, the master of political surprise and timing