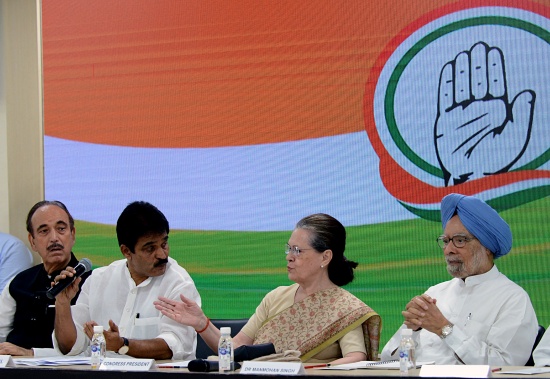 New Delhi, Oct 23 : To curb differences of opinion among party leaders on important issues, Congress interim chief Sonia Gandhi has set up an expert panel to define and formulate a structured response of the party.

She has also called a number of meetings on issues, like the National Register of Citizens (NRC), the Citizenship (Amendment Bill and and the Regional Comprehensive Economic Partnership (RCEP) agreement, facing the party and the nation.

Of late, the party leaders have been speaking in divergent voices, often contradicting each other, causing confusion among party workers as well as the people.

Several leaders spoke in different voices on abrogation of Article 370, the NRC, Savarkar among others. While Manish Tiwari criticised Vinayak Damodar Savarkar, and questioned the BJP proposal to award him Bharat Ratna, senior spokesperson Abhishek Manu Singhvi took a contrary stand and praised the Hindu leader.

Sonia Gandhi has also called a meeting at 10 a.m. on Friday to analyse the poll results. Seventeen senior party leaders, including Rahul Gandhi, has been invited for the meeting.

Another meeting is likely to formulate strategy on divestment of public cestor undertakings (PSUs), the Citizenship (Amendment) Bill and the Regional Comprehensive Economic Partnership (RCEP) agreement.

The Prime Minister is likely to make a decision on the RCEP next month. It involves free-trade agreement (FTA) among 10 members of the Association of Southeast Asian Nations (ASEAN) and its six partners -- India, Japan, China, South Korea, Australia and New Zealand.

The meeting on the NRC is scheduled at 5 p.m on Friday, which will also be attended by party leaders from north-east.

Like This Article?
Sonia sets up expert panel to formulate party voice