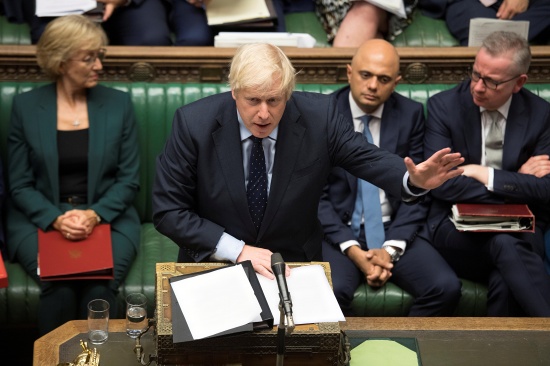 London, Oct 21 : The UK government on Monday will make a second attempt to hold a meaningful vote, presenting MPs with a straight choice to approve or oppose Prime Minister Boris Johnson's Brexit deal in principle.


Whether Parliament Speaker, John Bercow, will allow the vote was not yet clear. There were chances that he could rule it out on the grounds that it amounted to debating the same matter twice, the BBC reported.

The development comes after MPs in a historic Saturday session in the House of Commons voted 322 to 306 in favour of an amendment withholding the approval of Johnson's deal until all the necessary legislation was completed.

Tabled by Conservative MP Oliver Letwin, the amendment was intended to ensure that Johnson would comply with the terms of the Benn Act, passed by MPs last month which requires the Prime Minister to seek a Brexit extension.

"Letwin's delay amendment turned Saturday into a meaningless vote and denied MPs and the public the chance to end the uncertainty," the Downing Street said in a statement.

"Parliament needs a straight up-and-down vote on the deal - do MPs want to respect the referendum like they claim to... or do they want to frustrate and cancel Brexit altogether?"

The government also plans to introduce a legislation required to implement the Brexit deal - the Withdrawal Agreement Bill - during Monday's Commons session.

Johnson's Brexit deal ditches the backstop - the "insurance policy" designed to prevent a return to physical checks on the Irish border, the BBC reported.

Instead it will, in effect, draw a new customs border in the Irish Sea, because goods which could then travel onwards to Ireland will have to pay a duty tax.

The whole of the UK will leave the EU customs union, meaning it could strike trade deals with other countries in the future.

The EU is now considering how to respond to the UK's request for a delay, but has said Saturday's developments did not mean that the deal had been rejected.

Like This Article?
UK govt to make 2nd attempt to pass Johnson's deal