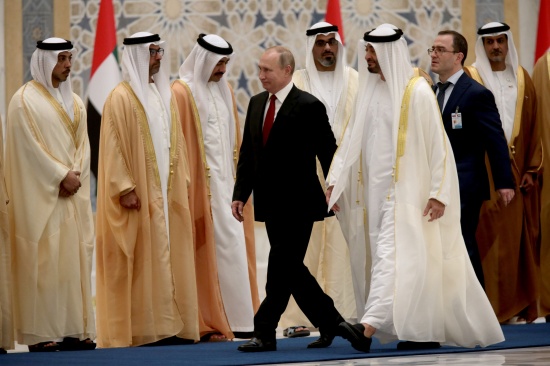 
During the meeting at the Presidential Palace in Abu Dhabi on Tuesday, the capital of the United Arab Emirates (UAE), the crown prince expressed his hopes that Putin's visit would achieve the set goals and objectives to boost UAE-Russia ties across multiple sectors, the official WAM news agency reported.

The two sides also exchanged views on regional and international developments, particularly on the Gulf and the Middle East region.

The crown prince said that the UAE is keen on furthering relations with Russia across multiple sectors, adding that the UAE and Russia agreed on the need to confront the threat of terrorism and extremism, Xinhua news agency reported.

Putin said that the bilateral relations continue to grow in a friendly and constructive context.

He noted that Russian tourists to the UAE increased by 23 per cent last year, adding some US $1.3 billion to the UAE's tourism economy.