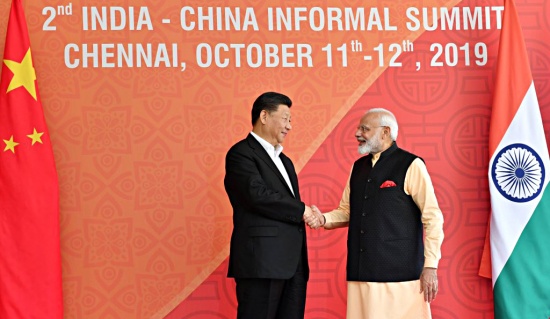 
The talks in a room with a good view of the Bay of Bengal went on for about an hour.

In the morning Modi received Xi at the entrance of the resort. The two leaders shook hands and then boarded a battery-operated vehicle to reach their informal meeting room.

Following which there will be delegation-level talks.

The leaders of the two most populous nations arrived here on Friday for the second Informal India-China Summit. The first one was held in Wuhan, China last year.

Briefing the media about the discussions Modi and Xi had on Friday, Indian Foreign Secretary Vijay Gokhale said the two leaders had detailed discussions on varied issues, including terrorism, increasing radicalisation, enhancing bilateral trade between the two nations and investments, among others.

Apart from the above, the two leaders and their officials will also discuss the bilateral trade and investments.

On the trade side, the discussions were expected to be centred around the Regional Comprehensive Economic Partnership and also Chinese industries requirements for making investments in India.

The bilateral trade between India and China is about $87 billion. The trade deficit is on India's side.

Even on Friday, they discussed about enhancing bilateral trade, investments and trade deficit.

The two leaders also agreed to enhance cultural tie-ups and knowledge sharing besides speaking about the ancient trade links that existed between the two countries.

The Second Informal India-China Summit will end with lunch and both the sides will be issuing separate statements.

In the afternoon Xi will fly out of India.