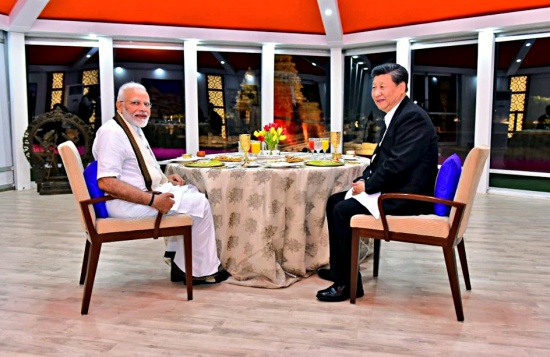 Mahabalipuram, Oct 12 : The one-on-one tete-a-tete between Prime Minister Narendra Modi and Chinese President Xi Jinping over dinner on Friday lasted for two-and-a-half hours, well beyond the planned time, and was "very open and cordial", holding promise of several Confidence Building Measures (CBMs) emerging out of the second informal summit between the two sides.


The one-on-one between the two leaders began at 7 p.m. and ended after 9.30 p.m. Modi and Xi spent "quality time" during the one-on-one without their aides, while the rest of the delegation had dinner at a separate location, said Foreign Secretary Vijay Gokhale while briefing the media after the talks.

Earlier, the two leaders chatted animatedly as they viewed the imposing seventh century rock-cut cave temples of Mahabalipuram, sipped coconut water and held hands and smiled for the crowds, both looking at ease and enjoying the picturesque and historical setting of the place which is a UNESCO world heritage site.

Chinese historian Hiuen Tsang had recounted his visit to the port town of Mahabalipuram and written about it. Many pottery and other relics have been found in the Chinese port town of Quanzhou, linking the town with India.

The beautiful cave temples, and the cultural performance by the Kalakshetra artistes that the two leaders watched later helped take away the rough edges of ties, which had seen tensions over China's statements on Kashmir and Beijing's open backing of Pakistan.

The two leaders spent "five hours of quality time" together, and most of it was on one-on-one conversation, except during the time they watched the cultural programme, said Gokhale.

It is "a dialogue, a conversation in progress", that would resume on Saturday morning between the two sides, he said.

The two leaders had a detailed discussion on their national visions, and governance priorities. Modi explained that he had received a renewed mandate for economic development, and Xi acknowledged the mandate, saying he looked forward to working with Modi "very closely on all issues for the next 4.5 years", Gokhale said.

They also talked about other developmental priorities, in particular about trade related issues, economic issues, and were trying to identify issues for investment that the two countries could encourage. They also discussed the trade deficit and the imbalance in trade, which is heavily tilted in China's favour.

The two also discussed the challenges both face on account of terrorism, said Gokhale.

There was "acknowledgement that both countries are large, and radicalisation is a matter of concern to both, and both would work together to see that radicalisation and terrorism did not affect the fabric of their multi-cultural and multi-ethnic and multi religious societies," he said.

There was acknowledgement that it was a common challenge they faced and that they will work together to overcome it, he added.

They also discussed their national visions and how to progress bilateral relations. The talks would continue on Saturday with focus on international and regional issues, besides other matters.

Both leaders complimented the Tamil Nadu government for the excellent arrangements, and Xi said he was "overwhelmed by the welcome accorded to him."

The walkaround at the three separate sites in Mahabalipuram "reflected the personal rapport" the two leaders have built over the two informal summits, this one and the first one held last year, and the several meetings they have had since 2014.

The two spoke of the historical and trading links between the southern part of India, of Tamil Nadu under the Pallava and Chola dynasties, and the eastern coast of China, especially Quanzhou, where recent Tamil inscriptions and fragments of architecture, of a possible temple built in the 12th century, were discovered. Both leaders discussed how to enhance knowledge in this aspect of bilateral relations, said Gokhale.

There was also a reference to the ancient Buddhist monk Bodhidharma who went by sea to China and took Zen Buddhism to China and Japan.

Modi also explained the significance of the Arjuna's Penance, and explained the underlying ethos, and took Xi to Ganesh Rath where 1,300 years after the Pallava dynasty, it continues to be part of living culture.

Modi explained that like China, India is a country with a continuous history.

Both the leaders were delighted with the Kalakshetra performance, said Gokhale.

Like This Article?
Modi, Xi chat without aides for two-and-a-half hours (Roundup)