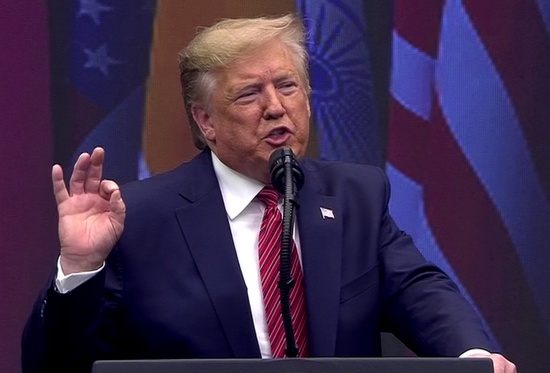 New York, Oct 11 : On Friday the impeachment inquiry game was truly afoot and the ugly Washington underbelly was exposed, the dragnet tightening against President Donald Trump.


Although many here reckon that Trump was clearly moving the pieces on the chessboard, controlling and dominating the narrative. Trump's 'wretched swamp' analogy getting stickiness rapidly. However, Trump was now more under the microscope for 'foreign influence' on US government's internal affairs than ever before.

Optically with Trump's personal attorney Rudy Giuliani being nailed with the indictment of two foreign-born men associated with him has not helped the flow of the discourse. With the duo arrested on federal campaign finance charges, Trump can't be shouting about his sense of victimhood anymore.

The two protagonists - Lev Parnas and Igor Fruman - were arrested on Wednesday evening at Dulles International Airport outside Washington. There are at least 228 House Democrats -- according to a CNN count -- who publicly stated support for impeachment proceedings, out of 235 members of the Democratic caucus (leaving just seven holdouts). Meanwhile Rep senators have remained more or less silent on this sensitive issue.

Moreover, US Ambassador Marie Yovanovitch was to depose before the House Committee shortly making things more difficult for the presidency given that Trump had called her bad news in his phone call with the Ukraine President in July this year.

Among others who are likely to testify - Fiona Hill, President Trump's former top Russia adviser, House Democrats have requested a deposition from Bill Taylor, the top US diplomat in Ukraine and House Democrats also issued a subpoena for US Ambassador to the European Union Gordon Sondland who the White House prevented from testifying earlier this week.

* The indictment of two foreign-born men with ties to the president's personal attorney Rudy Giuliani revealed a sprawling alleged effort to influence American politics and oust a U.S. Ambassador.

* The two men, Lev Parnas and Igor Fruman, are accused of funneling foreign money to numerous candidates and committees, including a super PAC supporting the president and a U.S. Congressman.

* Soon after the July call, White House officials moved a record of the call to a highly classified computer system, severely restricting who could access it.

Like This Article?
New developments in 'wretched swamp' target Trump