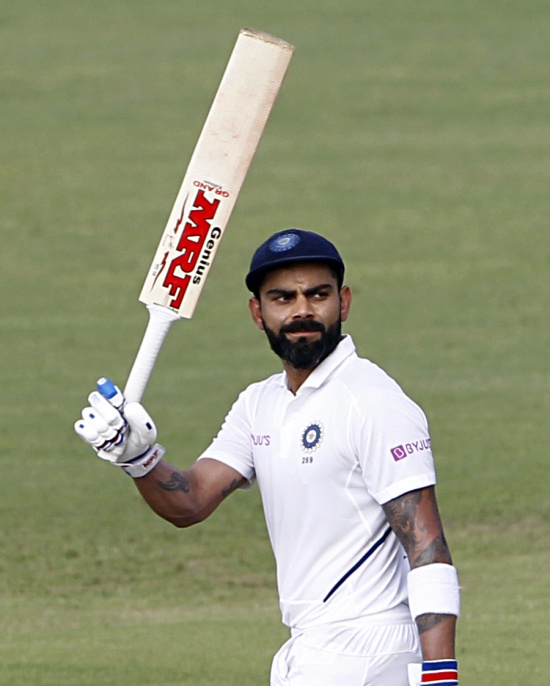 Pune, Oct 11 : India skipper Virat Kohli rated his first double hundred in North Sound, Antigua, against the West Indies and the one against England at home as his two most special innings after scoring a record seventh double ton against South Africa in the second Test here on Friday.


"All double hundreds feel good but if you ask me, Antigua and Mumbai against England. One was away from home and another one against England in challenging conditions," Kohli told BCCI's official website after Day 2's play.

Kohli broke a slew of records on Friday en route to his career-best 254 as India posted a mammoth 601/5 before declaring.

Kohli also reached his seventh double century in his 81st Test and in the process surpassed Sachin Tendulkar and Virender Sehwag who both had scored six double hundreds in their stellar careers to become the Indian with the most double tons.

"It feels good to get most number of double hundreds (by an Indian in Tests). It's a nice little thing to have," Kohli said.

"I struggled to get big scores initially but as soon as I became captain you invariably start thinking about the team all the time, you cannot think of yourself. In that process, you end up batting more than you can imagine so that's been the mindset for a very long time," said the captain who scored his maiden double ton in 2016 in the Caribbean to then amass 235 against the English in Mumbai in 2016/17.

Kohli batted for nearly eight hours. Asked about batting in the heat, he said "It's difficult but if you think about the team you end up batting 3-4 hours more than you would have. It was humid, that was the only challenging thing. Then (Ravindra) Jadeja came and you had to run hard with him."

Kohli and Jadeja (91), promoted to No. 6 with Hanuma Vihari not playing, shared a 225-run stand for the fifth wicket and Kohli said that partnership helped them achieve the plan.

"Plan was simple to get to 600 and get them to bat tonight. Jaddu batted brilliantly and allowed me to not take too many risks. That partnership set things up nicely for us. We ended up bowling 15 overs and got three wickets as well."

India pacers Umesh Yadav and Mohammed Shami took two and one wicket each respectively to reduce the tourists to 36/3.

Like This Article?
Antigua, Mumbai double tons most special: Kohli