We need to put pressure back on Ashwin-Jadeja: du Plessis 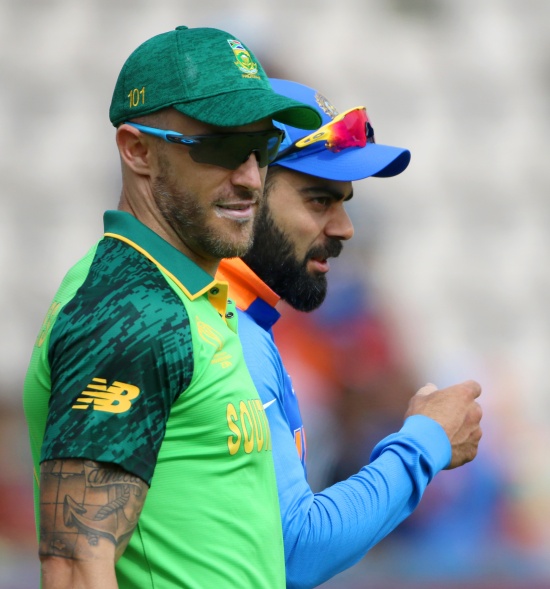 Pune, Oct 9 : The key for South Africa batters would be to put the pressure back on the Indian spin duo of Ravichandran Ashwin and Ravindra Jadeja in the second Test here from Thursday, feels skipper Faf du Plessis.

South Africa lost the first Test by 203 runs but gave a good account of themselves. In the first innings, du Plessis scored a half-century while Dean Elgar and Quinton de Kock registered hundreds as the visitors amassed 431 runs.

"I think the first innings for me was possibly the difference with us from 2015," du Plessis said ahead of the second Test.

"You try and survive on Indian spinning conditions and with that you can become too defensive and allow the opposition to be on top the whole time. There needs to be a good combination of positive play, element of taking risks at some stage of the game to transfer the pressure on the bowling team.

"And the record speak for themselves. Specially on the spin bowling front, the two of them [Ashwin and Jadeja] have done really well in India, so you've to try and put some pressure back on them. Otherwise they'll just bowl good balls all day long and one of those balls will have your name on it. The balance between attack and defence is important in the subcontinent," he added.

du Plessis also spoke about Mohammed Shami's intensity while bowling. Pacer Shami picked up five wickets in the second innings and helped India take a 1-0 lead in the three-match affair.

"I felt that he bowled a bit quicker than he did in the first innings," du Plessis said.

"Therefore obviously things happened a little bit quicker off the pitch. It was a day five wicket so he had that in his favour, but there's a huge intensity about his bowling. You're going to bowl short spells in the heat, but when you bowl you've to ensure you bowl with a lot of intensity and maximise it. And just learning from the lengths that he bowled.

"He's a guy that hits the stumps a lot, that's something from a bowling point of view we've to make sure we're better at. In the first innings specially, we bowled wide and therefore they scored frequently square of the wicket. So there's a lot of lessons to learn. I spoke to one of our young bowlers too and said to him that it's a good learning opportunity for you to sit and watch what someone does when they're on top of their home conditions. Just learn from his angles of the crease, how does he reverse the ball," he added.

On the Pune pitch which has a history of not being the best, du Plessis said he expects more spin here than in the first Test.

"Even in South Africa if you have a below average pitch and you probably got a warning. Whereas now you're deducted points. From the home conditions point of view, I think it is not as obvious as making wickets like the one in 2015. I know knowing Indian conditions, the turf is a little more red so I expect the ball to spin a little more than the first Test."

Talking about the World Test Championship, the 35-year-old said "You get 120 points for two wins and then you play a five-match series, then you've to win 5-0 which is a lot harder than winning 2-0," du Plessis said.

"But I've noticed with these things, you'll always find holes and flaws. It's never a perfect system. So for us it's just about being the first who is going through this journey now with the Test championship.

"I think home games are going to be really important. We knew while coming here that India will always be a tough place to play, but you've got to make sure you get your points at home especially. The nice thing now is that now your test matches where your team is already 2-0 up or something like that, that third test match in the past you've probably giving one or two young guys an opportunity... while now every test match you play is important over the two-year period. So every test match has a lot of value."

India skipper Virat Kohli on Wednesday opined that points for an away Test win should be doubled in the Test Championship.

"If you would have asked me to make the points table, I would give double the points for an away Test win. That is something I would definitely like to see may be after the first edition," Kohli replied when asked about the present points system of the World Championship.