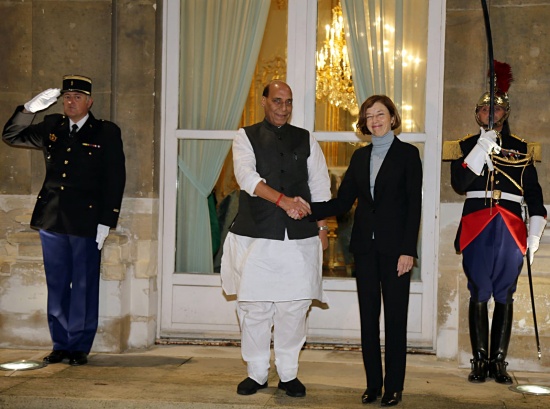 Paris, Oct 9 : Defence Minister Rajnath Singh held discussions on a wide range of issues pertaining to India's bilateral defence engagement with his French counterpart during his three-day visit to France.

"Had fruitful deliberations with the French Minister of Armed Forces, Ms Florence Parly during the Annual Defence Dialogue in Paris. We assessed and reviewed the full spectrum of our bilateral defence engagement," tweeted Rajnath on Wednesday.

Defence Secretary Ajay Kumar and Air Vice Chief Air Marshal HS Arora are part of the Defence Minister's team on his visit to France which began on Monday.

On Wednesday, the concluding day of his three-day tour, Rajnath is scheduled to meet top honchos in France to promote his government's initiatives for promoting indigenous development of defence equipment in India. Sources said he is likely to extend invitations to French defence industries for participation in the DefExpo which will be held in Lucknow, Uttar Pradesh in February next year.

Soon after receiving the first Rafale jet at Merignac on Tuesday, Rajnath had said that the handover is a new milestone in the Indo-French strategic partnership and marks a new high in bilateral defence cooperation between the two countries. He had also paid tributes to former Prime Minister Atal Bihari Vajpayee and former French President Jacques Chirac for laying the foundation of the Indo-French strategic partnership.