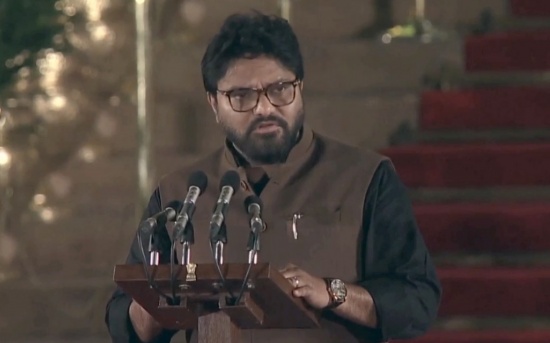 Kolkata, Sep 20 : Terming the Left student activists as "cowards" who had assaulted him in the Jadavpur University campus, BJP leader and Union Minister Babul Supriyo on Friday virtually challenged West Bengal Chief Minister Mamata Banerjee to charge them for the assault and said no one should be allowed to "malign and tarnish" the name of the institution.


"These cowards will not be allowed to malign iamp; tarnish the image of #JadavpurUniversity .. U shall be found out by us soon but don't worry, you shall not be treated in the manner you treated me," Supriyo said in a series of tweets, a day after he was heckled, slapped, punched and detained for hours by Left students in the campus.

Supriyo had gone to the university campus to attend a freshers' welcome and address a seminar on the National Register of Citizens.

Posting video footages of the assault, Supriyo identified a bearded youth and said "Identify of this Naxalite.. is he a JU student? Even if it's a yes, he has no business inciting a mob in the manner he did ... #TrueFootageOfJU #JadhavpurUniversity"

Tweeting another video footage, the singer-turned-politician said, "These are self-proclaimed Naxalites.. the one with a red Band and the one with blue stripe shirt - he is the one who can be seen catching hold of my hair.. Check out my reasoning with them and then check their demeanour".

The BJP leader also claimed to have identified the person who had led the assault on him and virtually challenged the state's CM to charge that man for the assault.

"This is the guy who led the assault in #JadavpurUniversity .. we will find him out and then see what @MamataOfficial does to him in terms of charging him for assault without ANY PROVOCATION whatsoever from our/my side," he said, tweeting another video.

After over six hours, Supriyo was "rescued" by Dhankhar, who drove to the university escorted by a large police force, and brought Supriyo out of the campus in his car. However, on his arrival, Dhankhar was also stranded for close to an hour in the campus as the Left protestors held a sit-in demonstration and even lay prostrate before his vehicle.

Like This Article?
Babul Supriyo challenges Mamata to charge his assaulters