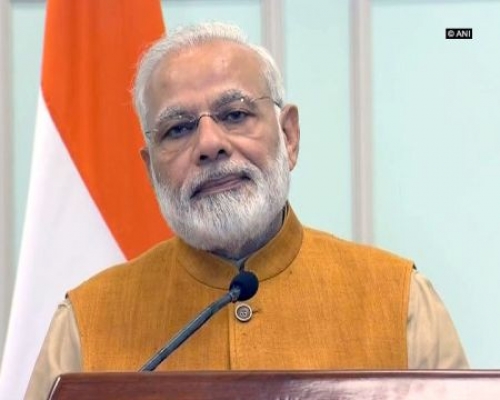 United Nations, Sep 20 : Prime Minister Narendra Modi and his team of ministers will swoop through the United Nations next week in a whirlwind of unprecedented high global diplomacy, as he will articulate his vision of India's place in the world, said India's Permanent Representative at the UN Syed Akbaruddin.


With China's President Xi Jin Ping skipping the annual UN General Assembly high-level meetings altogether and US President Donald Trump staying away from the key meeting, the Climate Action Summit, Modi will be the most high profile leader at the UN as the head of the second-most populous country in the world, which is a major force in fighting climate change, the focus of the sessions.

The UN General Assembly brings together about 45 Presidents or monarchs and about 100 Prime Ministers in one place, enabling intense diplomatic activity.

Modi is to deliver nine addresses at the UN and in the city, and along with External Affairs Minister S. Jaishankar, the Prime Minister is scheduled to have substantial bilateral meetings of at least 30 minutes each with more than 75 leaders from around the world, Akbaruddin said at a news briefing on Thursday.

In addition, there will be brief courtesy meetings with several others.

In between, he will also squeeze in meetings with business leaders to sell his Make in India programme besides interacting with Indian American community leaders.

Akbaruddin said the number of meetings is unprecedented for India at the UN, which is also a recognition of India's importance by other countries, as more and more leaders seek to meet the nation's leadership or participate in meetings convened by it.

Besides Jaishankar, Environment, Forests and Climate Change Minister Prakash Javadekar and Minister of State for External Affairs V. Muraleedharan are also in the ministerial team at the summit and they will split up the responsibilities.

Jaishankar will be holding several bilateral meetings with different foreign ministers and participate in the ministerial meetings of the South Asian Association for Regional Cooperation (SAARC); BRICS, the group of emerging economic nations comprising Brazil, Russia, India, China and South Africa; and G4, made up of India, Brazil, Germany and Japan, which lobbies for the expansion of the Security Council and supports each other for permanent membership.

Muraleedharan will be handling matters relating to the Non-Aligned Movement, Group of 77, Conference on Interaction and Confidence Building Measures in Asia (CICA), the Commonwealth, and the SAMOA Pathway programme for small island developing nations.

Javadekar will be responsible for the climate change-related events before the Action Summit and for the Coalition on Disaster Resilient Infrastructure event.

Modi's schedule for the week

Modi, who arrives in the US on Saturday, will speak at the 'Howdy Modi' rally in Houston on Sunday with President Donald Trump. He will also meet business and community leaders there.

Modi will be among the first four speakers at the Climate Action Summit convened by UN Secretary-General Antonio Guterres. Guterres has limited the speakers at the summit to only those who will make concrete commitments to increasing their nation's role in fighting climate change.

With his top billing at the meeting, it is expected that Modi will announce significant additional contributions by India to its commitments under the Paris Agreement on climate change.

He will also participate in two other meetings, the Leaders' Dialogue on strategic responses to terrorist and violent extremist narratives, and a session on universal health coverage, having introduced the Aayushman Bharat insurance programme in India.

Mahatma Gandhi, whose 150th birth anniversary will be commemorated this year, will be the focus of the day.

The highlight of the day is a session hosted by India on "Leadership Matters Relevance of Mahatma Gandhi in the Contemporary World."

Modi will participate in the inauguration of the Gandhi Solar Park, a gift of India to the UN to power its headquarters with green electricity, and the Gandhi Peace Garden with 150 trees. Both are symbols of the UN mission to fight climate change through generating electricity with renewable sources and by using trees to contain carbon emissions. UN stamps honouring the 150th birth anniversary of Mahatma Gandhi will also be released at the event.

Modi will attend the meeting of India-Pacific Leaders with 13 leaders of island nations.

The Bill and Melinda Foundation will confer him with the Goalkeepers Global Goals Award for his leadership of the Swachh Bharat Mission in bringing sanitation to the masses.

Modi will be the keynote speaker at the Bloomberg Global Business Forum on "Restoring Global Stability."

Participants at the forum include former US President Bill Clinton; Christine Lagarde, incoming President of the European Central Bank and former head of the International Monetary Fund; and CEOs of several large corporations.

Modi will also participate in the First India Caricom Summit with 14 leaders of member the nations of the Caribbean Community.

The day is devoted to several bilateral meetings.

Modi will speak at the UN General Assembly. The speech is expected to be a major statement of India's foreign policy for Modi's second term after a big electoral victory.

(Arul Louis can be reached at arul.l@ians.in and followed on Twitter @arul)

Like This Article?
Modi to convey India's vision via unprecedented level of diplomacy at UN