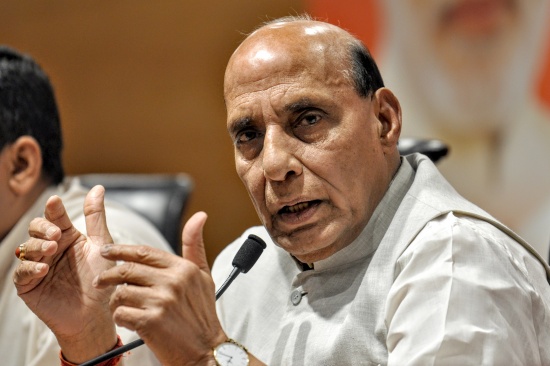 New Delhi, Sep 17 : Defence Minister Rajnath Singh said in New Delhi on Tuesday that the goal of the government is to make India a USD 10 trillion economy by the year 2030-32.


Singh was speaking at the annual conclave of Delhi-based Society of Indian Defence Manufacturers (SIDM).

Singh further said that under the 'Make in India' initiative of Prime Minister Narendra Modi, the government aims to not only establish India as a major arms manufacturing hub but also convert it into a net defence exporter. At present, the defence industry in India is hugely dependent on imports.

"In our envisaged Defence Production Policy, we have spelt out our goal to achieve a turnover of $26 billion in aerospace and defence goods and services by 2025, involving an additional investment of $10 billion and creating employment for nearly 2-3 million people," said Singh.

Singh elaborated on the initiatives undertaken by the BJP government to ease defence manufacturing in India including revising of the Defence Procurement Procedure in 2016 and establishment of an Investors' Cell to aid defence manufacturers.

"I am proud to share with you that simplification of procedures for defence exports has resulted in export of Rs 10,745 crore in 2018-19, which is nearly seven times the export achieved in 2016-17 and we have set a target of $5 billion for exports till 2024," he further added.

Like This Article?
India to become USD 10 trillion economy by 2030-32: Rajnath