Expect to have physical jurisdiction over PoK someday: EAM 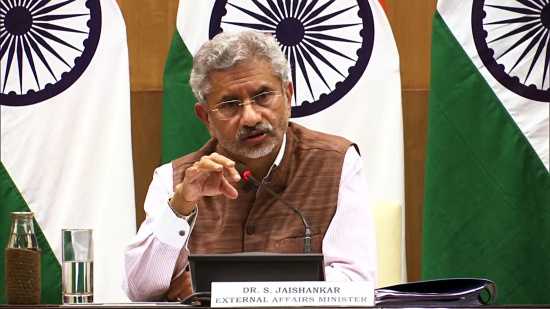 New Delhi, Sep 17 : India on Tuesday said that most of the international community understands its position on abolition of special status for Jammu and Kashmir and asserted that New Delhi expects to have "physical jurisdiction" over Pakistan-occupied Kashmir (PoK) someday, since it is a part of India.


External Affairs Minister S. Jaishankar, while addressing a press conference here, made it clear that there can be no normal relations with Pakistan until it "successfully" addresses the problem of cross-border terrorism and behaves like a "normal neighbour".

Replying to questions on Jammu and Kashmir and abolition of its special status, he emphasised that Article 370 was a temporary provision of the Indian Constitution and it had to end someday. This is what India has been telling the world.

"The international community understands by and large what our objectives are. This (Article 370) was a temporary provision. I don't see this in any analysis... When I meet foreign leaders, I give a history of this temporary provision. Since it was temporary, it had to end at some point of time," he said, while responding to a question whether India's image had been affected due to developments in Jammu and Kashmir.

The minister added that this provision was used by "a few" for their own vested interests and it affected social justice, development and the lack of development was "feeding separatism" which was being exploited by Pakistan.

While presenting the 100-day report card of the Modi 2.0 government, Jaishankar said that the incumbent government had only two choices, whether to go with what happened over 30 years or to change the policy which did not work.

He said that there was growing understanding around the world why the special status of Jammu and Kashmir was abolished.

To a question on PoK, the minister said "Our position on PoK is, has always been and will always be very clear. PoK is part of India and we expect, one day, we will have physical jurisdiction over it."

He was asked about the possibility of his meeting Pakistan Foreign Minister Shah Mehmood Qureshi on the sidelines of UN General Assembly later this month.

"If I meet Pakistan Foreign Minister on sidelines of UNGA, we will see if that happens."

On where Prime Minister Narendra Modi will meet his Pakistan counterpart Imran Khan, Jaishankar responded "I don't comment on principals. Not only on this issue, even on China. Look at climate of relationship, that gives an answer."

When pointed out that Qureshi has said that there is no point in talking to India, the minister said the problem is that Pakistan is "only doing talking and not doing anything against terrorism... Question today is not whether what you talk about. It goes back to what I said earlier -- it is for any neighbour, not only India. Show me any country which can accept that its neighbour indulges in terrorism and it goes on. Its (Pakistan's) behaviour is an aberration.

Like This Article?
Expect to have physical jurisdiction over PoK someday: EAM