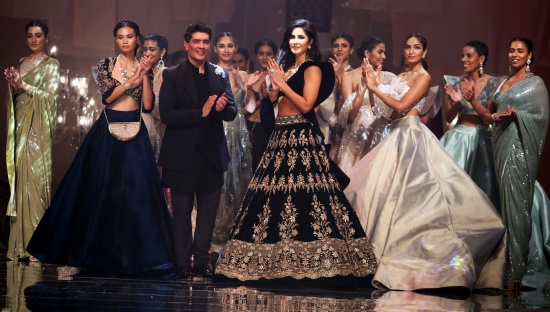 New Delhi, Sep 13 : Celebrated fashion designer Manish Malhotra who has completed 30 years in the industry says that even after spending so many years in the business, he wakes up each morning with the same enthusiasm of doing something which he loves.


"I love my work and I love the fact that each morning I get up to do something that I love," Malhotra, who has styled the who's who of Bollywood, including Kareena Kapoor Khan, Priyanka Chopra, Sridevi, Madhuri Dixit Nene among many others, told IANSlife.

The designer said that whenever someone wears his creation and feels good in it, he feels happy too. "I see beauty, I see positive, I see good.

The 52-year-old who launched his label in 2005 started his career as a model. He entered Bollywood by designing costumes for Juhi Chawla for the movie "Swarg" in 1990 when he was just 25.

The couturier has styled artistes in more than over 500 movies, some of which are "Rangeela", "Dil toh Paagal Hai", "Kuch Kuch Hota Hai", "Dilwale Dulhania Le Jayenge" and "Ae Dil Hai Mushkil", and received worldwide acclaim for his bespoke designs.


Malhotra said that during his journey in the industry he has seen how consumers have evolved over the time and added that this evolution of consumers make the designers evolve too.

The designer believes that the Indian fashion industry, which he says is a "great electric mix now", is placed on a high position on global platform.

Malhotra has also worked with many international artistes and received acclaim for his bespoke designs. In 1990s, he designed a traditional outfit for Michael Jackson during his visit to India. He also worked for Jean-Claude Van Damme, Reese Witherspoon in Mira Nair's "Vanity Fair", Kylie Minogue and Jermaine Jackson and wife Halima.

According to Malhotra, the industry is budding with young designers who are doing works of different kinds, taking the Indian fashion a notch higher.

"There are young designers doing different kinds of work - there designers who do couture, bridal and very very interesting bespoke designers. It's a great mix. You see that level when international companies look up to India and pick up designers and back them."

(Puja Gupta can be contacted at [email protected])

Like This Article?
Designers evolve with consumers: Manish Malhotra