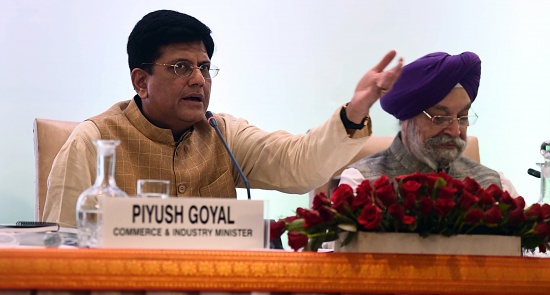 New Delhi, Sep 12 : Extending a helping hand to exporters, Commerce Minister Piyush Goyal said, here on Thursday, norms on competitive foreign exchange export credits would be out soon and it could be sub 4 per cent. The ministry will also soon announce a credit scheme for exporters with insurance cover enhanced up to 90 per cent from 60 per cent.


"Soon we will come out with contours of a vibrant programme to particularly support MSMEs and will make foreign exchange export credit available at competitive rates, like at sub-4 per cent for forex credit. All matters are on board. We will very soon come out with robust guidelines," the Minister said addressing the Board of Trade meeting.

Expressing concern at the fall in export credit, Goyal said he had discussed it with the Reserve Bank of India (RBI) and Finance Minister Nirmala Sitharaman.

Earlier, the Minister said India must bring back 19-20 per cent export growth to become the $5 trillion economy as envisaged by Prime Minister Narendra Modi.

"On the export front, we are willing to take bold decisions. The $5 trillion dollar economy can't be achieved unless we get back to the 19-20 per cent growth levels. We are looking at $1 trillion exports in five years and its doable.

"We need to dare accept a large target. Unless you accept large goals, we are not going to reach anywhere close to that. I would urge all to look at what's needed to achieve $1 trillion exports to boost the economy and ensure a fair share in global trade", he said.

The Minister said the RBI had been very supportive. "The ECGC has come out with practical solutions, which will empower banks to lend more to the exports sector. The ECGC policy is also being revitalised and relooked to make it more robust, more comfortable for bankers to lend more, Goyal said.

The ECGC, controlled by the Ministry of Commerce, provides export credit insurance support to exporters.

The merger of banks would enable them to disburse enhanced credit, raise risk appetite and resources from the market, he said and added, Rs 70,000 crore would be released to PSBs upfront. "All pending GST refunds due to MSMEs will be paid within 30 days and the improved 'one-time settlement' policy will benefit MSMEs and retail borrowers in settling their overdue," he said.

Goyal said exports crossed the half trillion-dollar mark at $537 billion in 2018-19, goods exports were at an all-time high of $331 billion and services at $205 billion. But India would have to achieve $1 trillion exports in five years, he added.

To achieve that, he said, "We need to increase production and improve competitiveness. Both central and state governments will have to take steps to improve the ease of doing business, decrease logistics cost and simplify regulatory procedures."

The Minister regretted that India failed to grab the exports growth opportunity thrown up by the US-China trade dispute. It provided a window of opportunity to Indian manufacturers to make exports to the US or China, where higher tariffs had been imposed on imports by each other, he said.

Stating that India have $17 billion trade surplus with the USA, and $53 billion trade deficit with China, the Minister said India must work on its strengths by exploring market access for farm and pharma products in different regions.