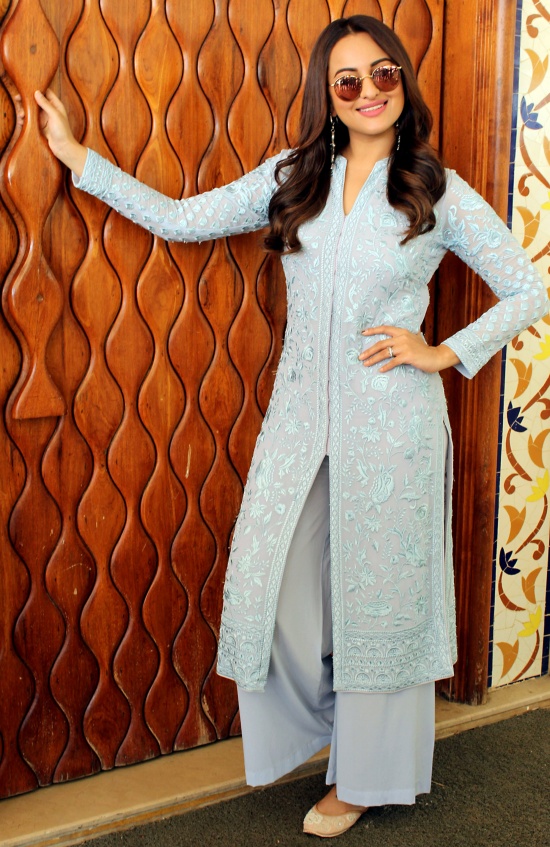 Mumbai, Sep 10 : Actress Sonakshi Sinha, known to be one of the leading fashion influencers in the film industry and on social media, feels that Ranveer Singh and Deepika Padukone are the most stylish couple in Bollywood.
Sonakshi was interacting with the media here on Tuesday after launching fashion e-commerce company Myntra's digital fashion reality show "Fashion Superstar".

When asked which celebrity couple she finds most stylist in Bollywood, Sonakshi said "I think Ranveer (Singh) and Deepika (Padukone) are the most stylist couple. Ranveer has his own style sense and whatever he wears, he carries it really well. Deepika is really beautiful, so whatever she wears, she looks nice in it."

Extending her support to the #SaveAarey campaign like many other Bollywood celebrities, the actress said, "When fire broke out in Amazon forest recently, there was a lot of brouhaha about it in our country. But here (in Mumbai) we are talking about cutting trees. Cauvery River has dried up because of less number of trees around it.

"I feel global warming has become a really important issue and we shouldn't take it lightly. The youth especially should come forward to take up this issue. I am all for planting trees and for preserving forest and nature."

"I feel the media should take up this issue so that we can save our environment," she added.

Sonakshi has played typical girl-next-door characters in many of her films. When asked how does it feel when people tag her as a 'desi' girl, she said "I feel desi (Indian) girls are really fashionable and you shouldn't underestimate them. Whatever stage I have reached today is all because of my Indian girl image. It has a wider reach in the country, because people identify and connect with it.

"As an actor, my work is to follow other fashion trends as well. When I go to some events or shows, I get an opportunity to explore other sides of fashion. I feel fortunate that I can adopt Indian and western styles as an actor. I don't want to restrict myself in a particular bracket or an image, and that has been my consistent effort over the years as an actor."

Talking about her upcoming release "Dabangg 3", Sonakshi said "The film will release in December. I am also eagerly waiting for it. This year I had four releases and it (Dabangg 3) will be my last release of the year.

"I am really excited because the 'Dabangg' franchise holds a special place in my heart. In fact today is the 9th anniversary of 'Dabangg' and I have completed 9 years in the industry. I am really happy that we are coming with the third part of the franchise and I hope the audience will appreciate the film."

Australian pace attack could be a real threat to India: Sunil Gavaskar

India highest attacked country by hackers in Asia in 2022

Meta plans to include younger teens in its Horizon Worlds app

Pam Anderson now has her own vegan cooking show