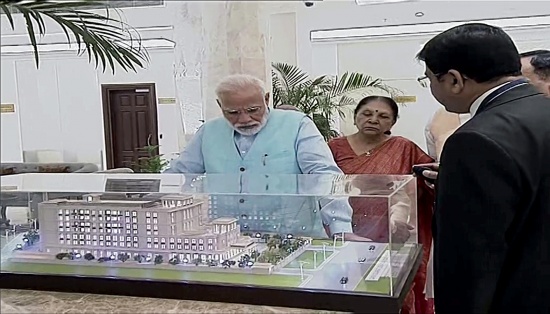 New Delhi, Sep 2 : Five years ago when Narendra Damodardas Modi came to the Lutyens' Delhi, he was an 'outsider'. Five years later, on Monday, he has etched a permanent mark on the abode of the elite.


Modi in his speeches and tweets has mentioned how he felt as an 'outsider', when he entered the power circle of the capital, first time in 2014, with the Bharatiya Janata Party's (BJP) landslide victory in the Lok Sabha elections.

The inauguration of Garvi Gujarat at 25B Akbar Road on Monday wasn't just any other event for him, but a power statement right in the face of the Congress, which he held as an elite power nucleus while he was the Gujarat Chief Minister.

Modi, dressed in a crisp blue kurta, harped on the concept of Gujarat. "I am happy that I have got the chance to meet today, after years, many old faces who have spent a lifetime for Gujarat".

Built over 7,066 sq metre at a cost of Rs 131 crore by the Gujarat government, it's not just an architectural marvel but a commentary by Modi. The PM's inaugural speech was dotted with words -- Gujarat and Gujarati. It's foundation stone was laid in September 2017.

Deputy CM Patel said, "It will serve as a home for Gujaratis in Delhi, far from Gujarat. It will represent the culture, craft and cuisine of Gujarat."

The BJP's who's who, particularly from Gujarat, including Chief Minister Vijay Rupani. Deputy Chief Minister Nitin Patel, former Chief Minister and UP Governor Anandiben Patel, as well as a host of decorated IPS and IAS officers, were in attendance.

Even the bureaucrats who had worked with Modi when he was in Gandhinagar were out in full force and the Prime Minister recognised them and acknowledged their presence in his speech.

As the Kutch art decorates Garvi Gujarat, Modi's speech was dotted with dhokla, thepla and other Gujarati food anecdotes.

When Modi was the Gujarat Chief Minister and Sonia Gandhi UPA Chairperson in the UPA era, the reference of Gujarat and New Delhi had different connotations.

Whenever Modi would taunt New Delhi, he would invariably refer to Sonia Gandhi and the Congress government at the Centre. In similar way, Congress leaders and Ministers would joke about the Gujarat model of development to take a dig at Modi.

While addressing a Gujarat Gaurav Yatra at Porbandar in 2017, Amit Shah had said, "Rahul Gandhi could not see this development in the state because of his Italian glasses". Hitting out at at the Congress for its alleged anti-Gujarat mindset, Modi had said, the Congress would "destroy Gujarat" if voted to power nationally.

In similar way, Rahul Gandhi would make fun of the Gujarat model of development in his election speeches. The Gujarat model was his common refrain at rallies to insinuate crony industrialisation.

Today, with the inauguration of Garvi Gujarat the self-proclaimed 'outsider' has conquered not only Akbar Road but the Lutyens' Delhi, that he was unable to do even after his 2014 landslide victory.

The Congress headquarters at 24, Akbar Road, which till now was a prestigious landmark, may certainly get a complex due to its new neighbour, Garvi Gujarat, right across the street.

(Anindya Banerjee can be contacted at [email protected])