Floods 'drown' BJP's euphoria on returning to power in K'taka 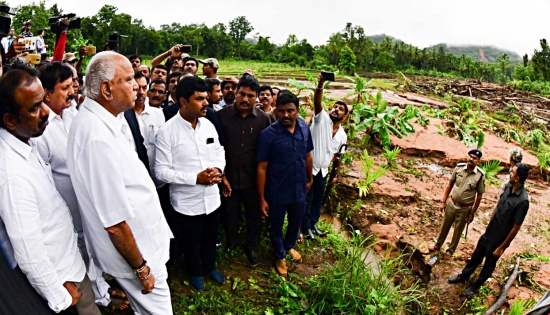 Bengaluru, Aug 14 : The BJP's euphoria over its dramatic return to power in Karnataka seems to have 'drowned' in the floods that the southern state is reeling under, in the aftermath of heavy monsoon rains since August 1.


Within a week of the ruling party's strongman B.S. Yediyurappa becoming chief minister for the fourth time on July 26, southwest monsoon gathered momentum and lashed two-thirds of the drought-hit state, causing floods, disrupting normal life and leaving a trail of death and destruction during the last fortnight.

"Though one month of rains and floods are better than a year-long drought, the natural disaster has been a setback to the ruling BJP, which is caught off guard by the rain gods and unable to consolidate its hold on the state with its chief minister being a one-man cabinet or show," a political analyst told IANS here on Wednesday.

Inability of the 75-year-old Yediyurappa in getting clearance from the party's high command for cabinet expansion due to its pre-occupation with events and developments in Jammu and Kashmir and rain havoc in the state, he has come under attack from the Opposition Congress and the Janata Dal-Secular (JD-S).

"The BJP's central leadership and Yediyurappa have failed to show the urgency, with which they grabbed power and formed the government, in cabinet expansion and governance across the state," Congress state unit president Dinesh Gundu Rao told IANS here.

Without numbers or simple majority in a full-fledged state assembly, the Bharatiya Janata Party (BJP) lost no time in forming its government just four days after the 13-month-old JD-S-Congress coalition government collapsed on July 23 for losing the floor test in the assembly by six votes.

"Urgency with which @BSYBJP wanted to grab the power at any cost isn't being seen in governing the state. Where is the cabinet? Does @BSYBJP plan to run all the ministries himself. #HorseTrader CM is worried about horses bolting from his stable," tweeted the Congress.

While the BJP's state unit leaders and cadres were on cloud nine for defeating the JD-S-Congress combine by division vote on July 23 and winning the floor test by voice vote in the state Assembly on July 29, their hopes of sharing the power or ruling the state were dashed by a combination of factors.

"The Opposition JD-S-Congress should worry more about their present fate and bleak future than our party and leaders as even former Chief Minister H.D. Kumaraswamy took 14 days to expand his cabinet on June 6, 2018 after he took office on May 23 and another two days to allocate portfolios. We don't have to learn anything from such warring allies," a defiant BJP's state unit spokesman G. Madhusudana told IANS.

Admitting that cabinet expansion has been delayed due to unforeseen circumstances at the Centre and in the state, the former lawmaker said, as rescue and relief operations in flood-hit districts were more pressing, the party and the government are focused on giving relief to the people from the devastation and restoring normal life at the earliest.

"The cabinet will be expanded soon after normalcy is restored, as people's welfare is our priority and the entire state machinery is working overtime on rescue and relief works in the affected districts across the state," said Madhusudana.

As party's national president and Union Home Minister Amit Shah and Prime Minister Narendra Modi were busy with the Parliament session for passing several bills, including two on Jammu and Kashmir, the official said the BJP high command could not meet to approve the names of the party legislators for cabinet posts.

"Yediyurappa will be going to New Delhi on August 16 to take the approval of our party's leadership for the first phase of cabinet expansion and putting in place a mechanism to implement the party's poll manifesto although the state budget presented by the previous government for fiscal 2019-20 has been passed by the Assembly before it was to lapse on July 31," said the official.

On the Opposition's criticism that "there was no government in the state, the people were suffering due to floods, as the administration is 'dead' and officials were clueless on what to do", Madhusudana said instead of whining and criticising, the Congress and JD-S leaders and cadres should join the state government and several voluntary organisations in the rescue and relief works as they are equally responsible and accountable to the people in distress after a natural calamity in the state.

"With swift aid and support from the Centre and other stakeholders, our government and party will rebuild houses, roads, bridges, highways and other infrastructure on war-footing in the rain-hit and flood-hit areas before the festival season begins in September," Madhusudana added.

(Fakir Balaji can be contacted at [email protected])

Like This Article?
Floods 'drown' BJP's euphoria on returning to power in K'taka