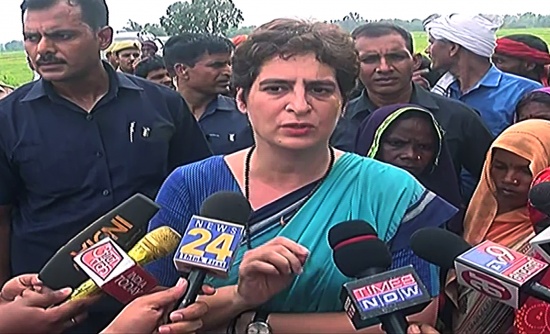 Sonebhadra , Aug 13 : Congress General Secretary Priyanka Gandhi Vadra, on Tuesday, said that the manner in which the BJP-led central government revoked Article 370 in Jammu and Kashmir was 'completely unconstitutional' and 'against all the principles of democracy'.


"There are rules to be followed when such things are done, which were not followed in this case," Gandhi said while briefly speaking with reporters during her visit to meet the victims of the Sonebhadra carnage.

This is the first reaction from Priyanka Gandhi on an issue that has left the Congress completely divided.

The party's chief whip in Rajya Sabha Bhubaneswar Kalita even resigned from the party and his House membership to protest the Congress's stand on the issue.

Jyotiraditya Scindia, who was at the helm of the party's campaign in western Uttar Pradesh along with Priyanka in the eastern part, has also supported the Modi government on the revocation of Article 370 that had until now bestowed special status on Jammu and Kashmir.

Like This Article?
Manner of revocation of Article 370 unconstitutional: Priyanka