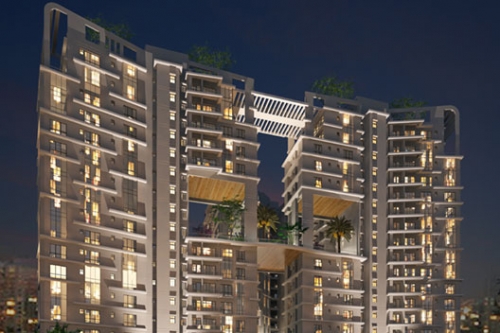 
The nexus between real estate and criminals in Uttar Pradesh has become so strong that the lines have been almost completely blurred. It is difficult to say who the real owner of a particular building is.

In this nexus, the politician merges perfectly as he lies somewhere in between the real estate owner and the criminal.

The modus operandi is simple. The real estate owner identifies the land, the criminal helps in getting the possession -- legally or otherwise -- and the politician takes care of government permissions. The money -- black or grey -- is pumped in by the "netas" and the "bahubalis" and the real estate owner gets a fair share, too.

The New Hyderabad and the Mahanagar localities in Lucknow are perfect examples of how this nexus works. These centrally located areas in trans-Gomti region were once marked by palatial bungalows, most of them in a semi-dilapidated condition.

The bungalows were mostly owned and occupied by elderly couples whose children had settled abroad.

Similar cases have been found in other cities like Allahabad and Kanpur, but the nexus blocks any action against this set-up.

In the early nineties, the bungalows began vanishing, their occupants went missing and high rise buildings started coming up. The neighbours spoke in hushed tones about how the occupants vanished overnight. The police turned a blind eye because no one filed a complaint.

Police officers and bureaucrats were also given flats in these buildings and the business flourished.

The Yogi Adityanath government began cracking the whip on this and the first victim was Samajwadi Party (SP) leader Sharda Pratap Shukla whose "illegal" constructions in Sarojini Nagar were the first to be demolished.

Another SP leader, Bhukkal Nawab, sensed the gravity of the situation and promptly joined the BJP to escape action. But the demolition threat continues over his illegal holdings since Adityanath is unrelenting.

A criminal-turned-politician explained how the nexus is no longer as strong as it used to be.

"First demonetisation brought a slump in the market and then the compulsion of Aadhaar and PAN card in all transactions put off the buyers. Earlier, people used to invest their black money in property, but now they opt for gold and diamonds. Besides, you never know when Adityanath cracks the whip. We are all lying low till the next elections," he disclosed.

A senior bureaucrat also echoed similar sentiments and said that his brother-in-law, who is a builder, had gifted a flat to him. "And I had a tough time explaining this to the Income Tax people who are apparently on an overdrive at the moment," he said.

Like This Article?
UP real estate: Tall buildings, taller criminals