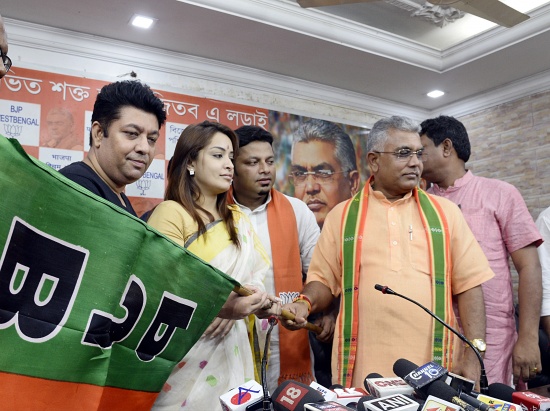 Kolkata, July 21 : Three days after a host of Bengali actors, including Parno Mittra, joined the Bharatiya Janata Party (BJP) in Delhi, Bengali film and television actress Rimjhim Mitra followed suit on Sunday even as Chief Minister Mamata Banerjee blamed the BJP for creating fear in the minds of celebrities by using central agencies.

Rimjhim is a popular TV actress who won 'Jhalak Dikhla Jaa Bangla' in 2013 and was also seen in 'Bigg Boss Bangla'. She also made her mark in films like 'Teen Yaari Katha' and 'Cross Connection'.

"I am not happy working under the monopolistic approach in the Bengali film and television industry. I have felt cornered many times and this is the first time that I am openly talking about supporting a party. I have joined the BJP as I found it welcoming," Rimjhim said after she was handed the BJP flag by its state President Dilip Ghosh.

Only a couple of hours before Rimjhim arrived at the state BJP headquarters, Chief Minister Banerjee alleged at the Trinamool Congress' "martyrs' day" programme that celebrities were being forced to join the BJP out of fear of the Central Bureau of Investigation (CBI) and the Enforcement Directorate (ED).

"Shatabdi Roy (Trinamool MP) was telling me that she was summoned by the ED. Not only her, but Prosenjit Chatterjee and Rituparna Sengupta were also summoned. They will call many more. They also suggested them to meet BJP leaders to avoid arrest," Banerjee said.

ED sources have said that Roy was called as she was the brand ambassador of a company owned by the Saradha group. Chatterjee and Sengupta were recently grilled in connection with the Rose Valley ponzi scam.

"If you do not meet them, you will have a similar fate like that of Sudip Bandopadhyay and Tapas Pal. I also have documents that an arrested person is being asked to disclose one influential politician's name who was involved in scams but he refused," she said.

Bandopadhyay, leader of Trinamool in the Lok Sabha, and actor-turned former MP Pal were arrested for their alleged involvement in the Rose Valley scam.

Negating Banerjee's allegation, Rimjhim said there wasn't an iota of truth in it. "I have joined the BJP as I believe in Prime Minister Narendra Modi's vision and want to work for the betterment of the television industry," she said.

On July 18, film and TV personalities Rishi Kaushik, Kanchana Moitra, Rupanjana Mitra, Parno and Biswajit Ganguly were among the dozen celebrities who cast their lot with the BJP at its Delhi headquarters.