The Star Wars: Stars vs Media 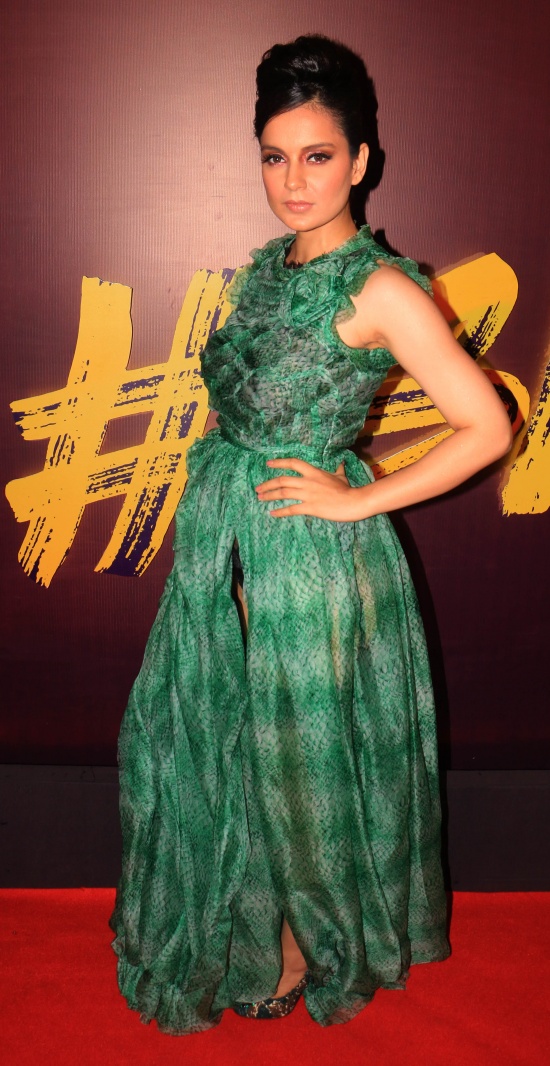 There is a new controversy as Kangana Ranaut has decided to take the media head-on. Kangana has by now made a reputation for calling a spade a spade. Mainly, she has made a reputation not to take things lying down anymore. There have been earlier instances of differences between reporters and stars, even leading to violence. But, those involved big stars, mainly men. And, all that the targeted reporters could do was the run away from the scene!


The era of one to one interviews with stars or the personal interactions are long over. And, one thing I have observed is that, in rare cases when a star consents for a personal interview nowadays, there are never any differences of opinion. For, the reporter assigned to interview is, for one, too much in awe of the star he meets (first thing he does is request for a selfie, lest it may not happen after the interview!).

The other thing is that the interviewer is too keen to kind of develop a rapport with the star so as to always have an access to the star as well as to be recognised by the star the next time around! The fact is, the media can neither make nor break a career. It is a fallacy they indulge in that their stand or writing against a star will affect him/her professionally. More so now when the media has spread itself so much that entertainment and film stars account for their following and circulation.

One such example is that of Salman Khan. He was never kind to the media, ignored them and even misbehaved. He did not care for awards and, in return, the press was equally unkind to him. But, the media could not even think of banning him. Because, he was the happening thing. Always newsworthy. Also, he was always involved in some controversy or the other. He was sort of bread and butter material for the media.

What happened between Kangana and some of the media guys was an argument during one of her press conferences to promote a film with her co-star, Rajkummar Rao. She referred to one of the reporters from a news agency for writing uncomplimentary things about her on a social network. Now, a news agency guy is not known to indulge in such activities. Even their reports are meant to be non-controversial. Also, this sort of reporters often have a misgiving that a star's career will be handicapped if one or two reporters or media houses 'banned' them. Especially, in the era when publications put their content on sale in the name of advertorial!

But, what ensued was yelling at the star, of course, with support from a subordinate. A ban was declared on reporting on Kangana! Does one really believe it will work or find will get support? The biggest of media houses have tried this ban thing. This here was one small tiff. And, however small, they become brave when one or two voices come in support.

Again, when a Sanjay Dutt or a Salman Khan or any other macho hero gets violent with a reporter or a photographer, there is no noise. As if, nothing happened. It was just a week back that Salman's bodyguards had a scuffle with a photographer. But, when it comes to photographers and video cameramen, they are always overzealous about their job. They get too close for a star's comfort and often poke their camera as well as the microphone in an actor's face. These TV reporters are not quite prepared for the task. They ask standard one or two questions. A routine first question is "Kaisa lagta hai!" Aapki film hit ho gayee, kaisa lagta hai? Similarly, when Salman Khan was granted bail after a few days in custody, a TV reporter asked Saleem Khan Salman jail se wapas aa gaye hai, aapko kaisa lagta hai? Sir, ek byte dijiye." Saleem Khan was bored of such senseless questions and replied, tongue in cheek "I am undergoing a dental treatment so can't bite!"

This film journalism, feeding on the film stars and their actions, has never been privy to any kind of unity even when it came to valid cause if ever there was one. All have their own vested interests to serve. On the other hand, even stars seem to think they can get away with anything, which they do most of the time and never repent. But, there was one exception, Anupam Kher. For whatever reason (reasons are usually something written against the actor). Anupam slapped the journalist from a glossy gossip magazine. But it is said that he felt guilty about the incident. It dawned on him that someday, somebody may slap him as well.

Sunny Deol's reputation as a muscular hero was good enough for media guys not to cross paths with him. However, a trade magazine had written something about his father, Dharmendra, and Sunny thought it was derogatory. It was while shooting in Nashik for "Narsimha" that the editor's son, Komal Nahta and Sunny came face to face. Nahta's standing by what his magazine had written angered Sunny who all but hit him. An ugly scene was averted as other journalists, also invited to cover the shooting, intervened and cooled Sunny down.

Then, there was a case of Vidhu Vinod Chopra who is not prone to getting any sort of negative media, especially when it comes to his film. It was at a party at Hotel Sea Rock in Bandra (filmmakers were known to throw a party at the drop of a hat in those days) that Chopra was seen running around tables chasing the film critic, Khalid Mohamed! Again, third party intervention stopped the situation from turning ugly.

Dharmendra may have been the pioneer of chasing journalists to vent his anger. There was not much of a media devoted to films in those days. Those which mattered were Filmfare, Star iamp; Style, Screen and a few vernacular magazines. Dharmendra had an axe to grind with Devyani Chaubal, the queen of gossip writing and M.S. Krishna from Blitz weekly (though Blitz was not a film magazine, it ran a column, Off Camera, by M.S. Krishna, devoted to gossip). It was during a fund raising rally with stars participating that Dharmendra spotted Devyani and Krishna. While the former is said to have escaped safely, Krishna bore the brunt of Dharmendra's anger. Soundly bashed up, he landed up in a hospital for some days! His pictures, bandaged up, appeared in the media.

All these stars and all these fights and assaults, and nobody had banned anybody yet. But, a star did ban the media successfully. The star was Amitabh Bachchan. He decided very early in his career that he wanted nothing to do with the film media. And, he was the one who was better off with the arrangement. By this time, some glossy gossip magazines had arrived on the scene but they never had access to Bachchan. Bachchan, meanwhile, merrily went on giving a hit after another hit! He finally softened his stand to the media only after his accident on the sets of Coolie and realising how the media had stood by him.

As for Kangana, the irony is that, she has been continuously appearing on TV news as well as reality shows channels giving interviews or making appearances. Because, she is the newsmaker. She is now more in the media than ever before!

*The Hrithik Roshan starrer, Super 30, is one of those modern day films eulogising a real life hero. This one is a biopic on the Bihar do-gooder, mathematician, Anand Kumar, who chooses 30 underprivileged but bright students every year and train them for IIT-JEE entrance exams.


The story as it sounds may not promise many commercial ingredients and, hence, is expected to cater mainly to a select audience. Hrithik Roshan playing the protagonist being a plus, the film, however started slow and remained on the lower side with its box office collections through its first week. The good thing being it did not drop drastically and collected about Rs 76 crore at the end of its first week. The film has no major opposition in its second week and should maintain steady figures.

*Article 15, another unlikely film to hit it off commercially, is enjoying a dream run. The film has collected about Rs 8 crore in its third week to take its three week tally to Rs 59.5 crore.

*Kabir Singh has already proved to be the blockbuster of the year and the film continues to hold strongly even its fourth week with figures of Rs 16 crore taking its four week total to Rs 260 crore.

(Vinod Mirani is a veteran film writer and box office analyst. The views expressed are personal. He can be reached at vinod.mirani@gmail.com)

Like This Article?
The Star Wars: Stars vs Media