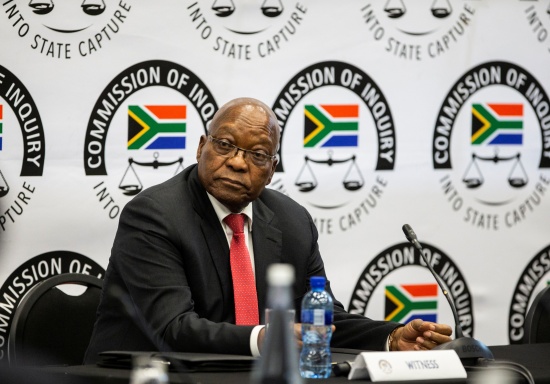 Johannesburg, July 16 : Former South African President Jacob Zuma said he was the person who inspired the Indian-origin Gupta family to establish a "progressive media force" by starting The New Age newspaper and the ANN7 television station, which has since collapsed, the media reported.

Zuma made the remarks on Monday as he began started his long-awaited testimony before the Zondo Commission, which is inquiring into allegations of "state capture" during his rule.

Zuma told the Commission that he did this because South African media was "negative" and "unfair", the Johannesburg-based Business Day newspaper reported.

"I thought it was a very good thing that they did. There was no law broken there.

"The ANN7 bought a fresh air to the country," he said, adding that these "progressive" Gupta media organisations were not defined by any form of corruption or wrongdoing.

While disclosing that he named the New Age newspaper, Zuma insisted that he "never did anything unlawful" with the family, who he has suggested were closer to former presidents Thabo Mbeki and Nelson Mandela than they were to him.

Zuma believed that the role he played in setting up the Gupta media organisations resulted in the family being targeted and their facing accusations of state capture.

The family, and its relationship with and influence over Zuma have been central to allegations of state capture, the Business Day said.

Zuma's remarks came after former Communications Head Themba Maseko previously testified that the former President called him prior to his meeting Ajay Gupta over government advertising in The New Age and asked him to "help" them.

Zuma has also denied that the Gupta family played any part in the hiring and firing of ministers.

"Am I not capable of doing my work?" Zuma asked, adding that he never made such decisions "alone".

According to reports, the Gupta family, originally from Uttar Pradesh, migrated to South Africa in 1993. They are based at the Sahara Estate in Saxonwold, Johannesburg.