Halep returns to top 4 in WTA rankings after Wimbledon win 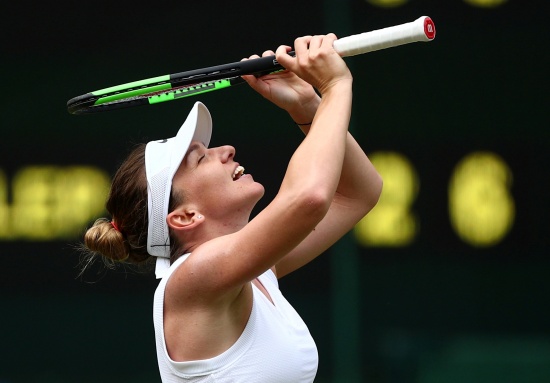 Madrid, July 15 : Romanian tennis player Simona Halep climbed back into the top 4 in the WTA rankings issued on Monday after her straight set win over Serena Williams of the US in the final of the Wimbledon on Saturday.

Becoming the first Romanian ever to win a Wimbledon singles title, Halep ascended three spots to the fourth position after taking home her first title of the season and second Major trophy following her triumph in the 2018 French Open.

The fourth spot is not the highest Halep has reached in her career that kicked off in 2006, Efe news reported.

Halep, who turns 28 in September, became world no. 1 for the first time on October 9, 2017 and has held the top spot for a total of 64 weeks over two spells.

Williams, whose hopes to match Australian Margaret Court's record of 24 Grand Slam titles was dealt a new blow, climbed one spot to ninth.

Having squandered her sixth chance to equal Court's record since claiming her last Major at the Australian Open in 2017, Williams will now have to wait a little longer to have another chance to achieve the milestone.

After returning from a maternity leave, Williams fell short at the French Open round of 16, the finals of the Wimbledon and the US Open in 2018 and did not get past the Australian Open quarterfinals nor the French Open third round in 2019.

The top 3 in the rankings remain untouched, as Australia's Ashleigh Barty continues to lead ahead of Japan's Naomi Osaka and Czech Republic's Karolina Pliskova, respectively.

By contrast, Coco Gauff of the US jumped 172 spots to a career high world no. 141 after her dream run in the Wimbledon.

The 15-year-old, who became the youngest player to take part in the singles competition in Wimbledon, reached the fourth round before going down to Halep.

Enroute the fourth round, qualifier Gauf stunned seven-time Grand Slam champion Venus Williams (39) of the US in the first round.

Then she had to dig deep before overpowering Polona Hercog of Slovenia in the third round before her sensational run came to an end at the hands of Halep.