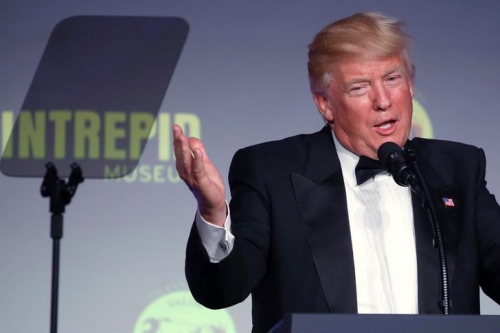 Washington, June 18 : US President Donald Trump has said that immigration enforcement authorities would begin deporting millions of undocumented migrants from the country in the coming week.


Trump however, did not provide further details on the immigrants who would be affected by the mass removal, reports Efe news.

"Next week ICE (Immigration and Customs Enforcement) will begin the process of removing the millions of illegal aliens who have illicitly found their way into the United States," Trump tweeted on Monday.

"They will be removed as fast as they come in.

"Mexico, using their strong immigration laws, is doing a very good job of stopping people," Trump added, before claiming that Guatemala was getting ready to sign a so-called "Safe-Third Agreement."

With this agreement, the US would be able to send asylum seekers from other countries to Guatemala.

A similar deal is being worked on with Mexico, although the latter has so far refused to agree to the proposal.

Trump went on to attack his political rivals, members of the Democratic Party who oppose his aggressive rhetoric and hardline policy on immigration, which is expected to be a central issue in the upcoming 2020 presidential campaign.

"The only ones who won't do anything are the Democrats in Congress," he tweeted. "They must vote to get rid of the loopholes, and fix asylum! If so, Border Crisis will end quickly!"

In early June, the US and Mexico agreed that the former will be able to deport to Mexico all Central American asylum-seekers who have illegally crossed the border.

Hundreds of thousands of immigrants have reached the country in the last few months in record numbers, continuing the rising trend that has marked Trump's time in office so far.

According to the estimates submitted by the Trump administration, the migratory influx was set to reach a million people this financial year.

The US detained more than 132,000 immigrants in May at its southern border, a 30 per cent increase compared to April and the largest figure recorded in a single month since 2006.

The majority of these immigrants belong to Central American families who voluntarily turn themselves in to border officials and formally seek asylum, a humanitarian framework that allows them to be released and obtain temporary residence and work permits.

ICE and the US Customs and Border Protection agency have come under scrutiny by human rights groups and activists for the treatment of asylum-seekers and apprehended aliens and the conditions they endure at detention centres.

According to a data investigation by NBC news published on June 9, at least 24 immigrants have died in ICE custody during the Trump administration.

Like This Article?
Trump threatens to begin deporting undocumented immigrants