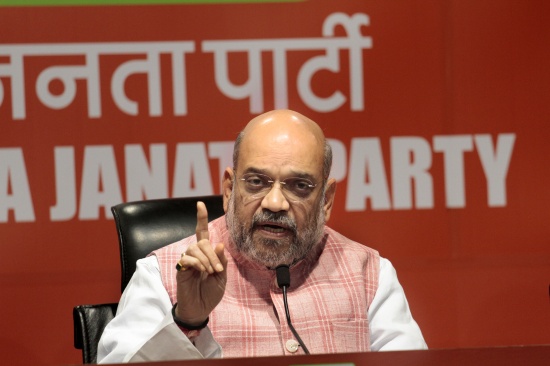 New Delhi, May 17 : BJP President Amit Shah on Friday defended the candidature of party's Lok Sabha nominee from Bhopal Pragya Singh Thakur as 'satyagrah' against the fake case of saffron terror, saying after her reply to the show-cause notice, the party would take appropriate action.

Shah accused the Congress of defaming Hindu-culture and sought an apolgy from Congress President Rahul Gandhi over the issue.

"A fake case of bhagwa terror was made in which all the accused have been acquitted. Even court has said that the bhagwa terror was imagination. Some people were earlier arrested in 'Samjhauta Express' case who were related to LeT. American agencies also supported it," he said.

"Who compromised with the national security? Who was responsible for it? This incident defamed Hindu culture. The Congress President should apologize for it," he asked.

He said the party has served a show-cause notice to Pragya Thakur and has asked her to reply within 10 days.

"We initiated prompt action. After she files a reply, party's disciplinary committee will take its call. According to that, we will take appropriate action," he said.

The developments came a day after the comment by Thakur, an accused in the Malegaon blast case, provided fodder to the Congress to target the Bharatiya Janata Party.

"Nathuram Godse was a 'deshbhakt', is a 'deshbhakt' and will remain a 'deshbhakt'. People calling him a terrorist should instead look within. Such people will be given a befitting reply in these elections," Thakur told reporters in Bhopal on Thursday.

As her statement went viral, two BJP MPs -- Union Minister Anant Kumar Hegde and Nalin Kumar Kateel -- also came out in her support. Besides Thakur, Hegde and Kateel have also been served show-cause notices by the party's disciplinary committee.

Like This Article?
Pragya's candidature was 'satyagrah' against 'saffron terror': Shah