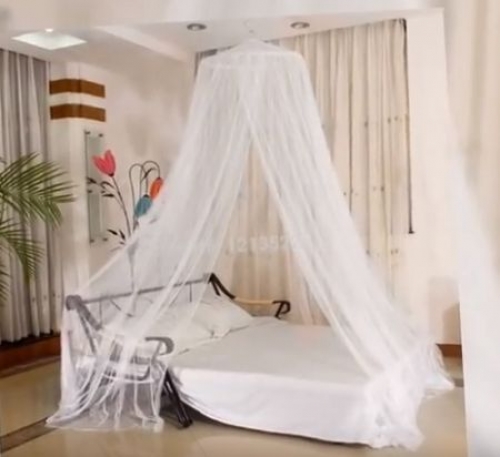 London, April 12 : A new kind of bed net can emerge as a potent weapon against malaria as a two-year trial involving more than 15,000 children has shown that it can significantly increase protection against the mosquito-borne disease.

The trial in Tanzania showed that a long lasting insecticidal net treated with a chemical called piperonyl butoxide (PBO LLIN) reduced the prevalence of malaria by 44 per cent and 33 per cent in the first and second year respectively, compared to a standard net treated with pyrethroid only.

The study, published in the journal Lancet, also showed drastic malaria control through indoor residual spraying (IRS) with the insecticide pirimiphos methyl, which after a single spray round reduced malaria infection by 48 per cent for an entire year.

"The trial is the first clear evidence that nets treated with piperonyl butoxide can significantly improve personal and community protection from malaria compared to standard pyrethroid-only nets in areas where there is high pyrethroid resistance," said principal investigator Mark Rowland from London School of Hygiene and Tropical Medicine.

"It also demonstrated that pyrethroid resistance is now a significant problem in some areas and standard LLIN are less effective than before, and that the new IRS controlled malaria for an entire year before needing to be re-sprayed," Rowland said.

Anticipating the possible failure of current control tools due to resistance, the World Health Organization (WHO) and the London School of Hygiene and Tropical Medicine have been collaborating with the chemical industry for almost 20 years to develop new types of LLIN and new insecticides for IRS.

One of these is a novel LLIN which incorporates piperonyl butoxide (PBO), a chemical which blocks the natural defence mechanisms of insects - the oxidase enzymes that would otherwise metabolise insecticide - which means the pyrethroid on the LLIN remains potent against mosquitoes despite resistance.

This chemical synergist stops insects from breaking down the pyrethroid within their bodies, so the insecticide stays toxic to the insect.