Legislation should guarantee for providing service to peoples: Vice President 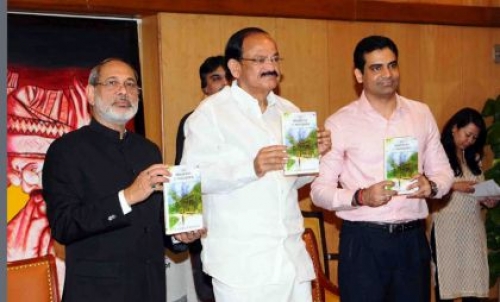 New Delhi : The Vice President of India, Shri M. Venkaiah Naidu has said that Legislation should guarantee for providing service to peoples. He was addressing the gathering after releasing the book 'The Mavericks of Mussoorie' authored by Shri M. Ramachandran, here today.
The Vice President said that the book provides an opportunity to acquaint the general reader more intimately with how the Indian Administrative Service or the bureaucracy functions. He further said that the book also captures the professional competence, commitment to duty and hard work exhibited by the author in improving governance. Civil servants do face complex challenges in implementing policies of the government, he added.

The Vice President said that the central services have to act innovatively to ensure that there is maximum governance and minimum government. He further said that it has been described as the 'Steel Frame' that holds the society together because it is supposed to be an objective implementer of the laws of the land. The higher civil services in the country have been one of the greatest contributors to nation building in the post-Independence India, he added.

To explain the reason for lower growth of GDP during past quarter in the country, the Vice President gave an example of a college which indulged in malpractices to get good results. When a strict Principal was appointed in the college, he stopped all the malpractices and the students failed in the examinations. Resultantly, the students, teachers, management have blamed the Principal.

Following is the text of Vice President's address:

"I am happy to launch "The Mavericks of Mussoorie" written by Shri M. Ramachandran. This is a memoir or a chronicle of the experiences of a civil servant, who rose from a humble beginning to become a senior bureaucrat of the rank of the Chief Secretary in a State and Secretary at the Centre.

The book provides, in the author's own words, an opportunity to acquaint the general reader more intimately with how the Indian Administrative Service or the bureaucracy functions.

It is a candid account of his career spanning 38 years of his service. Dr. Ramachandran had held various positions in Uttar Pradesh and Uttarakhand, including the post of the Chief Secretary in Uttarakhand. He had also served at the United Nations Development Programme and was also Secretary to the Central Government.

This book while providing accounts of the challenges faced by a civil servant gives specific suggestions on how government needs to be improved in the larger interests of the common man. It makes pointed references to where governance changes are requiredâ€”something quite relevant in today's context when every effort is being made to make systems and procedures hassle-free for the common man. The book also captures the professional competence, commitment to duty and hard work exhibited by the author in improving governance.

Dr. Ramachandran made a mark through his actions and pro-active measures in the infrastructure sector as seen in his role in the newly-created Uttarakhand or as Urban Development Secretary when a series of urban reforms were initiated such as national urban sanitation policy, credit rating of cities and promotion of public transport through BRTS and Metros in cities.

Friends, no doubt, civil servants do face complex challenges in implementing policies of the government. Instead of routinely going about the task, the bureaucrats, especially those from the IAS and other central services have to act innovatively to ensure that there is maximum governance and minimum government.

The civil service has been described as the 'Steel Frame' that holds the society together because it is supposed to be an objective implementer of the laws of the land. It has also been sometimes viewed in a negative light as too rigid and unbending. Sometimes it is also described as a steel frame that has got rusted because of inefficiency and corruption. While there are some aberrations and exceptions, I must say, the higher civil services in the country have been one of the greatest contributors to nation building in the post-Independence India. Most of them have been women and men of conviction, deep commitment and high level of competence. They have been creative translators of national policies. They have been innovative thinkers advising the political executive on policies and programmes. They have led from the front and provided India with the administrative leadership that the founding fathers like Sardar Vallabhai Patel had envisaged when they created the All India civil services in seventy years ago.

Memoirs of administrative leaders like Shri Ramachandran ji provide the younger civil servants a source of inspiration. This book will give all civil servants a feeling that they can achieve tangible results despite all the odds and formidable challenges.

The global and Indian governance contexts are changing rapidly. Like the transition from a colonial to a democratic regime necessitated a shift in emphasis, we are at the cusp of another change. We must move into a new managerial culture. The rising expectations of the people and the greater need for transparent, participatory and inclusive governance requires a shift in emphasis once again.

The focus is now on a more efficient, effective governance intended to serve the citizens, especially those who are marginalized. The philosophy of the Government also is taking care of suppressed, oppressed and depressed people to follow the policies of Mahtama Gandhi, Dr. Ambedkar and Deen Dayal Upadhyaya of serving he unnerved, reaching the unreached, funding the unfunded, banking the unbanked, and taking care of the last man in the line, that is what called as 'antyodaya', uplifting the poorest of the poor. That is the main objective of the government and the Prime Minister has given a call, a three line mantra, 'Reform, Perform and Transform'. This reformation is very much needed for the transformation of the great nation that has to be done at every level. People at every level of administration, political or administrative, they have to well equipped with new ideas and further the process. The need of the hour is innovative service delivery and speedier project execution. The task before the civil services today lies essentially in identifying and removing the bottlenecks to create a vibrant and responsive, results-based management system. The accent must be on outcomes and impact and the higher civil services must set the tone. They must create a culture of evaluation, constant reflection and improvisation and innovation.

Now the government is coming with service guarantee. The very fact that you need a legislation to provide guarantee for the service. Once the governments makes the law, the implementation part has to be taken care of by the bureaucrats, under the supervision of the political leaders. If the leadership is good, honest, dedicated you can do wonders. The scheme of Jan Dhan Yojana is one of such example. Within one year 26 crore people have opened bank account. No special staff, no overtime work, they did it with the commitment of the leadership.

Reasons for lower GDP growth during the past quarter. Imaging that you have appointed a Principal, director of a college which is notorious for poor quality of education. You find that most students cheat during the examination with support of the teaches and do well in exams. The result of the college has been always 90 per cent in recent years. You are a person with principles. And hence you have decided to eliminate cheating from the examination. You installed CCTV cameras in all examination halls and also take proper actions towards the students and the teachers mall practices. The results is that, cheating is totally stopped in the examinations. However, the performance of your college dips drastically and less than 50 per cent students passed. This has been a bad performance in the recent years. You know face flack from all sides. Students are angry because they failed due to your strictness, teachers are angry because their track record got spoiled because of your, trustees of the college are angry because the result of their college has taken a beating under your charge. That is what happening in India right now.

The ultimate objective, my dear friends, is to ensure that the benefits of the democratic governance are shared by all citizens and we leave no one behind. Our common endeavor is to transform Swaraj into Suraaj. I compliment the author on this excellent book that shows some of the ways in which this can be accomplished.

Legislation should guarantee for providing service to peoples: Vice President

How the timing of your food can affect weight loss

Pallavi Joshi on 'The Vaccine War': Science thriller is a new genre, we decided to accept the challenge