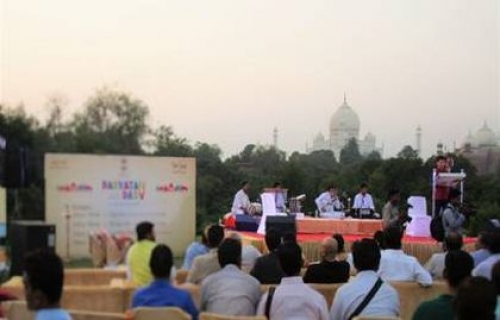 New Delhi : India is abundant with rich cultural heritage and pristine natural beauty which not only attracts foreign tourists but also domestic tourists.
India is promoted as tourist destination by central government as well as different states to attract tourists within the country. Thus, tourism has emerged as a major contributor to the economy and job creation for women and youth.

In the last few years' youth travel within the country has witnessed a strong growth. Paryatan Parv is one event which motivates youths to not only travel to different parts of the country but also involve in spreading the message of Paryatan Parv among the countrymen.

Various activities are planned to engage the youth of this country. Various competitions like Essay, painting, Quiz are being organised. Sensitization of Youth through seminars, Excursions trips, Nukkad Natak etc. are core components of Paryatan Parv. The Parv aims at inculcating tourism culture among youths so they could become key influencers in promoting tourism in the country.

The highlight of the day seven of the ParyatanParv was a colourful and unique programme organised on the Rural Tourism theme at Pollachi, Tamilnadu. The event gave an insight of the life of rural India and how the rural sites can be promoted as tourist destination.

As Part of the ParyatanParv, Cultural Evening and Tourism Exhibition was organised by Government of Himachal Pradesh in association with Indiatourism Delhi.State Government of Telangana in association with IndaiTourism Hyderabad organised various events such as Cultural Evening, Illumination around Taramati Baradari site, Guided Heritage Walks in City, Sensitisation Programmes for Stakeholders, Quiz / Essay / Painting Competitions for students and Ministry of Textile ,Government of India has organized exhibition of Handicraft.

State Government of Gujarat has organised a Seminar on Home Stay Policies. Government of Madhya Pradesh setup a Craft Mela including Craft Bazaar, cultural evening and food festival near Western Group of temples at Khajuraho, Government Uttarakhand organised an exhibition of Cultural Arts of the State at Almora.

Doordarshan is celebrating Paryatan Parv by hosting a Photography Contest titled 'Smile India Smile'.The general public is invited to participate in thiscontest by sending pictures at ddsmileindia@gmail.com, Winners of the contests will receive attractive prizes by Doordarshan.

Other Central Ministries are also participating in ParyatanParv by organizing various activities. The Ministryof Railways has illuminated some of the railway stations of tourist importance like Vasco, Shimla, Siliguri, NewJalpaiguri, Sanchi, Varanasi, New Tinsukia, Rampur Hat, Sealdah in the country.

The Ministry of Civil Aviation has illuminated, some of the major airports in the country such as Delhi, Chennai, Hyderabad, Varanasi, Srinagar, Jaipur, Aurangabad, Dimapur, Imphal, Vijaywada, Raipur, Bhubaneshwar.