Violence in Myanmar must stop: Tillerson 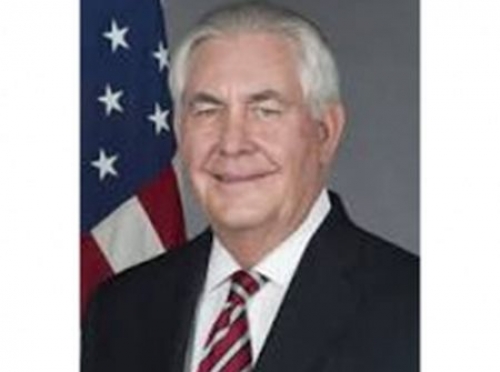 Replying a question about his views what is taking place in Myanmar and Bangladesh, and the behavior of Aung San Suu Kyi, Tillerson said this violence must stop; this persecution must stop. It's been characterized by many as ethnic cleansing. That must stop.

"I think it is important that the global community speak out in support of what we all know the expectation is towards the treatment of people, regardless of their ethnicity, and that we must - this violence must stop; this persecution must stop. It's been characterized by many as ethnic cleansing. That must stop," Tillerson said.

He directed the blame toward Myanmar's powerful military, which is responsible for security operations that have seen nearly 400,000 people flee to neighbouring Bangladesh in the past three weeks after Rohingya insurgents launched coordinated attacks on government forces.

"With respect to the horrors that we are witnessing occurring in Burma, I think it is a defining moment in many ways for this new emerging democracy, although it is a power-sharing arrangement. We all clearly understand that. And so we appreciate the difficult and complex situation Aung San Suu Kyi finds herself in. And we need to support Aung San Suu Kyi and her leadership, but also be very clear and unequivocal to the military share - power-sharing in that government that this is unacceptable. And this is going to, in many ways, I think, define the direction that Burma will take. We - they need our strong support. We should give them our strong support," Tillerson said.

Violence in Myanmar has invited reactions from around the world.

Earlier on Thursday the European Parliament passed a resolution calling on the "military and security forces in Myanmar to immediately cease the killings, harassment, and rape of the Rohingya people, and the burning of their homes".

The Myanmar government "and State Counsellor Aung San Suu Kyi in particular, should condemn unequivocally all incitement to racial or religious hatred and combat social discrimination and hostilities against the Rohingya minority," said the resolution.

UNICEF said on Thursday that about 400,000 Rohingya Muslims have fled Myanmar since Aug. 25, some 60 percent of them children.

United Nations Secretary-General Antonio Guterres on Wednesday reiterated his call for Muslims from Myanmar's Rakhine state to be granted nationality or at least a legal status that would allow them to lead a normal life.

"I call on the Myanmar authorities to suspend military action, end the violence, uphold the rule of law, and recognize the right of return of all those who had to leave the country," the Secretary-General said in his first press conference since the opening of the 72nd session of the General Assembly.

Guterres repeated his call for "an effective action plan" to address the root causes of the situation, which he said he been left to fester for decades and has now escalated beyond Myanmar's borders, destabilizing the region.

The refugees are fleeing a fresh security operation in which security forces and Buddhist mobs have killed men, women and children, looted homes, and torched Rohingya villages.

According to the government of Bangladesh -- where thousands of Rohingya have fled -- around 3,000 Rohingya have been killed in the crackdown.

The Rohingya, described by the UN as among the world's most persecuted peoples, have faced heightened fears of attack since dozens were killed in communal violence in 2012.