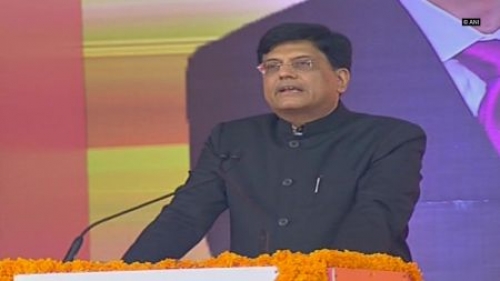 Ahmedabad (Gujarat) , September 14 : Union Railway Minister Piyush Goyal on Thursday said that the bullet train is a symbol of brotherhood between people of India and Japan and will bring important changes to the country, even as Japanese Prime Minister Shinzo Abe, along with Prime Minister Narendra Modi, laid the foundation stone for the proposed Ahmedabad-Mumbai High-Speed Rail Network, known as the bullet train, here today.
Goyal said that this partnership would prove to be beneficial for India and would also contribute to the country's 'Make in India' Mission.

"People will get employment opportunities with this project and it will bring important changes in the country. This bullet train will be a symbol of brotherhood between people of India and Japan," Goyal said.

Addressing the gathering for the first time after taking over as the Railway Minister, Goyal said that the bullet train project would boost the economies all along its route.

"Many people criticised the introduction of the Rajdhani Express, but now it is the train everyone wants to travel by.

"The employment generated with the project will boost the GDP,' he added.

The bullet train, which has a capacity to accommodate 750 people, is expected to reduce travel time between the two cities from seven to three hours.

The distance of 508 km will be covered in two hours and seven minutes by the bullet train if it stops at four stations namely Ahmedabad, Vadodara, Surat and Mumbai.

With this, India has become the first to import the iconic 'Shinkansen' bullet-train technology after Taiwan. The Japanese Government has also agreed to fund the project at minimal interest rates.
https://www.newkerala.com/india-news.php ↣

Olivia Colman is unrecognisable in the new 'Great Expectations' trailer

Salma Hayek reveals the truth: She was considered 'too sexy' for romcoms

Bir is all set to echo with soulful music