Parrikar advises IIT graduates not to crave for glamorous jobs 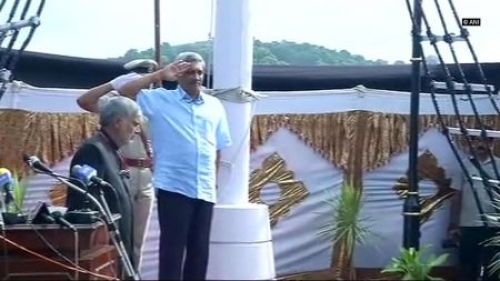 He made these remarks recently when he delivered the Convocation Address on the occasion of the 55th Convocation of the Indian Institute of Technology, Mumbai.

Parrikar asked the IIT graduates not to crave for glamorous jobs.

"Do not limit yourself to a career path that is obvious and glamorous. The challenges of the world are becoming more and more complex by the day, and the IITs have a moral responsibility to provide enterprise and intellectual firepower to solve them," he said.

Highlighting the modern day challenges the young graduates faced, Parrikar said, "The world that I entered as a fresh IIT graduate is vastly different from the world that you are about to enter."

Suggesting that some IIT graduates even join politics, he said, "I am often referred to as India's first IIT educated Chief Minister. While it is a matter of personal pride, it is a cause for concern at an institutional level. How come IITs have not become the training ground for one of the most important jobs in our nation? This needs to change. And, if you think politics is too dirty for you to enter, I would say that this is precisely why you must enter politics."

Commenting on how India's biggest strength was its democracy, the Chief Minister said that, "People should never cede the central role in a democratic process to politicians, and expect miracles out of them. People should be constantly and meaningfully engaged in the governance process, and this engagement should be a very matured and a pragmatic one that demands accountability and transparency on one hand, while on the other hand provides opportunity, space and support to succeed."

He spoke of development saying that "It is not the birth right of the urban elite alone. Equitable distribution of development is a pressing need of rural India where most of our people live".

But he warned of expecting instant results saying that such expectations often derail any reform, "When it comes to long term changes, we shouldn't expect instant results. And, we should never forget that what comes quickly also goes away quickly."

Parrikar also talked about the need to imbibe a sense of patriotism.

"For a nation to succeed there needs to be strong binding force. The more valuable the pearls are the more strong must the string be. Ours is a great nation with many things to be very proud of, including the opportunities that lie ahead of us. And, these pearls of the past, the present and the future can only be strung together by a strong sense of patriotism. Discuss, debate and disagree how much ever you may want, but when it comes to working on the field, fill your minds with the idea that our nation always comes first."

He emphasized on the importance of primary school education and said that gaps in learning at a primary level are very hard to fix as a child grows.

"And such poor learning outcomes plaguing our primary schooling system is in my view India's biggest challenge. This weakens the very foundation of our nation."

The other challenges the Chief Minister spoke of was in health care sector, the state of our farmers, social inclusion of marginalised groups, integrating women into every sphere, skill development, unemployment and the environment.

The Chief Minister spoke of the need to educate and inform people of the transformative power of technology.

"Resistance to change, due to the fear of the unknown, is quite natural," he said citing the example of the solid waste management plant set up in Goa.

"While I was the CM of Goa in 2012, we set-up what is today one of India's best solid waste management plant. In the place where we have the plant today, there was a huge garbage dump spreading foul odour and polluting the nearby areas for more than two decades. But when we decided to clear the dump, set up a plant and process the garbage, many people protested citing environmental concerns."

He added, "Today you will not find foul odour even inside the garbage plant. And, every high level dignitary who visits Goa these days visits the plant. Everyday children from various schools in Goa visit the plant."

Speaking of the Government's commitment towards building a clean environment and clean Goa, he spoke of a pilot project of India's first bio-gas bus which would be fuelled by the garbage in Goa.