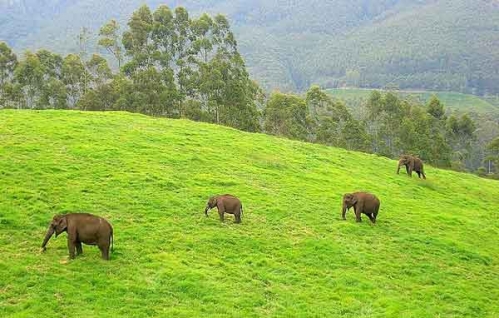 New Delhi , August 14 : On the occasion of World Elephant Day, leading wildlife conservation NGO Wildlife Trust of India (WTI) announced the launch of the Gaj Yatra, a campaign that aims to raise awareness about the shrinking space for India's wild elephants and the importance of securing elephant corridors.
The campaign was launched at the Nehru Memorial Museum and Library by the Union Minister for Environment, Forest & Climate Change Dr Harsh Vardhan, WTI Executive Director & CEO Vivek Menon, and actor, filmmaker, humanitarian and WTI Brand Ambassador Dia Mirza this morning.

The Gaj Yatra, which is partnered by the International Fund for Animal Welfare (IFAW), is the biggest event ever planned around India's wild elephants. It will take the form of a roadshow that will move through 12 elephant range states over the next 15 months, with elephant-sized artworks created by local artists and craftsmen as the centrepiece.

Gaj Mahotsavs will be organised at different venues along the way, with concerts, parades, street plays and activities for children in particular.

The Gaj Yatra's objective is two-fold: to raise awareness about the plight of India's National Heritage Animal, and to build a groundswell of popular support for the securing of elephant corridors.

India has about 30,000 wild Asian elephants (Elephas maximus); over 50% of the species' estimated global population. Yet these natural nomads face an increasingly uncertain future in the country.

The growing resource needs of India's human population have led to the destruction and fragmentation of wild habitats across the country, depleting the area available for elephants to roam and causing the loss of their traditional migratory paths.

Elephant corridors are vital natural habitat linkages that enable elephants and other wildlife to move through the degraded habitats lying between larger protected forests freely, without being disturbed by humans. With Asian elephants now occupying a meagre 3.5 percent of their historical range, securing these corridors has become a conservation imperative.

Wildlife Trust of India has been working with the Government of India's Project Elephant, state forest departments, and national and global NGOs to secure and protect elephant corridors for over a decade through its Right of Passage project, and it is hoped that the Gaj Yatra will lend a renewed urgency to these efforts.

"We share our country with the world's largest number of Asian elephants. However, in recent years our wild lands have been steadily destroyed and degraded, posing a serious threat to elephants", said Dia Mirza.

"For their security and well-being, WTI has come up with the Gaj Yatra, a campaign to create awareness about elephant corridors, which enable the free movement of elephants through increasingly fragmented habitats."
https://www.newkerala.com/india-news.php ↣

Most foreigners in Canada stay in province that give them study permit: Report