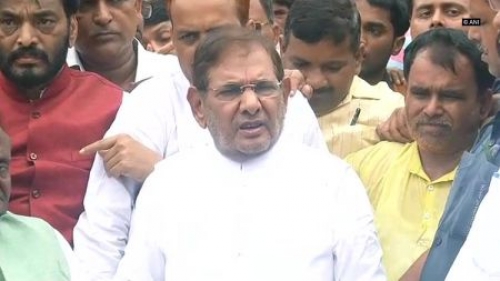 Patna (Bihar) , Aug 10 : Another wagon was added in the midst of Bihar's ongoing battle, when Senior Janata Dal (United) (JD(U)) leader Sharad Yadav announced that he would kickstart a three-day Jan Samvad Yatra to discuss the repercussions of the withdrawal of the grand alliance in the state, adding that the 'faith' of 11 crore people of Bihar was 'broken'.
Addressing the media, Sharad Yadav said that people, who established the mandate were hurt because of the whole situation.

"I have been conducting rallies for 40 years. Even during the elections, we stayed in Bihar, did their publicity and stood with the mandate," Yadav said.

The senior party leader further said that the mandate was supposed to be for five years, which didn't happen and they are disappointed.

"One manifesto was ours and one manifesto was that of the Bharatiya Janata Party (BJP). In the 70 years of history, I cannot find an example where two opposition parties have a common manifesto," he said.

Yadav further said that these are "troubled" times for democracy in Bihar.

"I would just like to say that I still stand with the mandate and am going to meet a few friends from the Janata Dal," he added.

Sharad Yadav has kickstarted his three-day Jan Samvad Yatra today and will meet the people of Bihar to discuss the repercussions of the withdrawal of the grand alliance in the state.

Yadav will visit nearly eight to ten constituencies of Bihar from August 10 to 12 and will hold discussions.

Day one of the tour will see Yadav covering Patna-Sonpur-Muzaffarpur, while on day two he will be visiting Muzaffarpur-Darbhanga-Madhubani.

On the last day, Sharad Yadav will meet the people of Madhubani-Supaul-Saharsa-Madhepur.
https://www.newkerala.com/india-news.php ↣