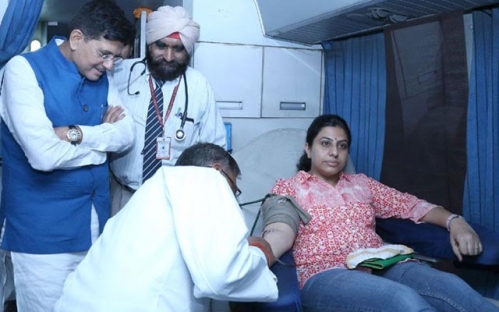 New Delhi , June 14 : "Blood is the elixir of life"- this saying is true, especially, when a person in acute need of blood gets it in time.

Researches to find a suitable alternative to blood have not been successful. These situations make the blood a precious resource. The paradox that surrounds the blood as a resource is "it being readily available and abundant, it is scarce".

This very well suits with the Indian scenario. Though India is the second largest human resource in the world, we are annually in deficit of two million blood units, according to WHO. In India only one percent of the population donates blood.

In India, after the landmark Supreme Court judgment in 1996(Common Cause v/s Union of India) on blood donation, the scenario of blood banking has been streamlined. The process of creating a large donor base is under progress.

The process of creating a repeated voluntary donor based inventory needs a lot of effort. It is a three-step process.

The major hurdle in blood donor motivation is breaking the myths that surround the blood donation.

Breaking the myth helps the donor to keep his first step towards the 'holy' process of donating blood.

There are innumerable myths; the major ones, as jotted by Dr Vikas Hegde, Consultant, Transfusion Medicine and Transplant Immunology, BGS Gleneagles Global Hospitals, are enumerated here:

Truth: it is a completely safe procedure done under the supervision of trained staff. The fainting after donation occurs rarely, in about 2 % of first time donors. It can be easily prevented by simple precautions such as drinking a glass of water before donation, not standing up immediately after donation and taking more fluids throughout the day following donation. Secondly, the bags with needles used for the collection are new (one time use), hence there is no risk of contacting an infection.

Myth 2: Blood donation decreases the sexual drive and there is loss of energy.

Truth: the blood donation is not associated with the decrease in sexual drive. With the precautions stated above there will be no feeling of being drained out of energy.

Myth 5: Women should not donate blood.

Truth: if the hemoglobin levels are above 12.5 g % she can donate provided she is not in menses, pregnant or feeding.

Truth: according to some studies donations improves the health by reducing the viscosity of blood, rejuvenating the blood cells and thus helping the heart of the individual. These claims, however, need to be proved by further researches. At present it can be said that by donating blood at safe intervals (3 months) there is no harm to the health.

Blood donation is a safe, well monitored process which does no harm to the donor. Above all it is the best gift that any individual can give. Each donation of blood saves three-four lives.

Let's FORGET THE MYTHS and make a pledge on this world voluntary blood day (June 14, 2017) that "We will- Give blood. Give now, give often."