New Delhi, March 7: The group is as diverse as it can get.

One is a retired principal, one is a veteran army officer, one is a homemaker, one runs an adventure academy, some of them are grandmothers, and yet another is a communication professional.

Three of them are Everest summiteers. 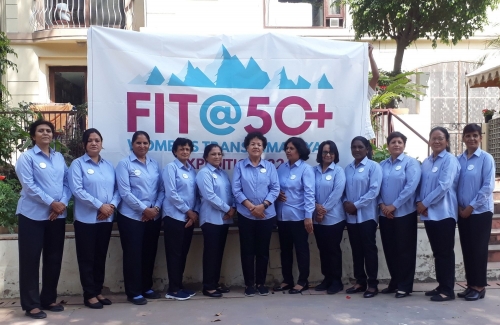 These dozen women are all 50 plus, coming different parts of the country but driven by a singular passion - their love for the Himalayas and adventure. They are all looking forward to the unique expedition titled 'FIT@50+ Women's Trans Himalayan Expedition 2022' that will be an excruciating journey along the arduous terrain, not to mention the unpredictable weather.

The expedition would be flagged off from here on Tuesday.

"We want this to send a strong message for women of all age groups that women in their 50s and 60s can embark on such an expedition that tests ultimate human endurance," expedition leader and Everester from Uttarakhand, Bachendri Pal (68), told IANS.

In 1997, Pal had led a similar trans-Himalayan expedition though her teammates were all young then. It has been her long-cherished dream to organise another such expedition which got a fillip when she came across the Fit India movement last year.

Planning started in earnest since then and last month, all of them met at the adventure training academy run by Bimla Negi Deoskar and her husband near Wardha in Maharashtra to fine tune their journey.

On a daily basis, the women would trek almost 80 per cent of the designated length and the remaining would be covered on vehicles, it has been decided.

The 'FIT@50+ Women's Trans Himalayan Expedition 2022' is being organised by Tata Steel Adventure Foundation (TSAF) in collaboration with the Ministry of Youth Affairs and Sports.

During this five-month-long expedition, these adventurous women would traverse the Himalaya from east to west - from Arunachal to Ladakh - covering over 4,977 km and crossing 37 mountain passes.

The journey will commence from Arunachal Pradesh and pass through Assam, West Bengal, Sikkim, Nepal, Uttarakhand, Himachal Pradesh and Ladakh, before concluding at Tiger Hill in Kargil at an altitude of 16,608 feet. Due to Covid-19, Bhutan has several restrictions on entry of foreigners and hence it has been skipped.

Chetna Sahoo (55) from West Bengal is another Everest summiteer, who was part of the 1997 expedition with Pal. As deputy expedition leader, Sahoo has planned the entire route, almost identical to the 1997 journey.

"While much of our route is the same, we have tried to improve on lacunae from the last expedition and added stretches that were not possible the last time for several reasons," Sahoo said.

Most of these women have kept their adventure spirits high. Taking out time for five months from their routine, time away from home and their families, is something that each one has managed, some easily, some with difficulties.

For instance, lecturer Savita Dhapwal (53) from Chhattisgarh had faced the problem of slip disc some years ago. But her passion for the mountains prompted her to tide over the pain and practice for the expedition and she is thankful that SAIL chairman granted her special leave from her teaching work.

Major Krishna Dubey (60) from Uttar Pradesh had been working on her new home since she took VRS in 2019. "Now, with most of the work done, we did a small puja, shifted to the new place and handed over the remaining work to my husband and son before I joined this expedition," she said.

Each of the expedition members has a similar story of grit, be it educationist Gangotri Soneji (63) from Gujarat, sportsperson Payo Murmu (54) from Jharkhand, Sushma Bissa (56) from Rajasthan, communication professional Shamala Padmanabhan (65) from Karnataka, Bimla Negi Deoskar (56) from Maharashtra, Vasumathi Srinivasan (68) from Karnataka (the eldest member) or Annapuran L (52) -- all surpassing personal problems and ever endeavouring to test the human endurance limits.

As part of the expedition, the women would also be spreading educational and sanitation awareness among children besides reaching out to women appealing them to stretch their limits for progress in life.

For instance, for Chaula Jahagirdar (64) from Gujarat, it was back to being fit for the rigourous trek. She was already into walking and yoga, but increased it to 10-15 km per day and intensified her yoga routine.

"But more than anything, for me, being in the Himalayas is an opportunity for inner progress. It is a time when automatic meditation happens and increases my inner strength," she said.