Doha (Qatar), Nov 24: Spain's 7-0 win over Costa Rica is one of the biggest wins in the recent World Cup finals and given the way that teams from what were traditionally not considered footballing nations have improved drastically in recent years, wins such as Spain's are getting rarer and rarer. 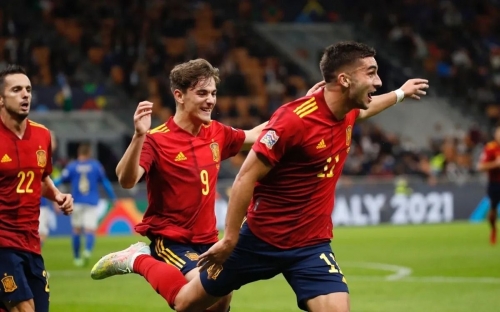 The increasing number of players from Asia and Africa now playing in European leagues and the money invested in their domestic competitions means sides are now much better prepared, both physically and tactically.

However, that wasn't always the case, as a look back at some of the biggest historical results in the World Cup finals shows.

The heaviest-ever defeat in the World Cup finals came in Spain in 1982 when Hungary defeated El Salvador 10-1 in their opening group game, with four of the goals coming in 11 chaotic second-half minutes as El Salvador fell apart.

To their credit, the Central Americans were able to recover from that thrashing. Conceding just one goal to Belgium and two against Argentina in their two remaining matches, Hungary still failed to qualify from their group and have not qualified for the finals since 1986.

Hungary also handed out the second-worst defeat in the World Cup as they thumped South Korea 9-0 in Switzerland. To be fair to the Koreans, this was Hungary's "golden generation", and the Hungarian team that would go on to the final contained players such as Ferenc Puskas, Sandor Kocsis, Nandor Hidegkuti, and Jozsef Bozsik.

South Korea also lost 7-0 to Turkey in that World Cup but has improved a lot since then and their current side, with players such as Son Heung-min, Kim Min-Jae and Hwang Hee-chan, would now fancy their chances of beating both of those teams, reports Xinhua.

Zaire was on the wrong end of a 9-0 defeat to Yugoslavia in 1974. The African side was coached by a former Yugoslavian international, Blagoje Vidinic, and was 3-0 down after 18 minutes, prompting the coach to replace first-choice keeper Kazadi Mwamba with Tubilandu Ndimbi, who was only 5 foot 4 inches tall.

It wasn't a tactical masterstroke and Ndimbi was beaten six times, with three of those goals arriving in the next 18 minutes.

The biggest defeat in the 21st century came in 2002 when Germany thrashed Saudi Arabia 8-0 in Japan. Miroslav Klose scored a hat-trick and players such as Michael Ballack and Oliver Bierhoff also scored, with the Germans scoring four times in the last 20 minutes.

As Argentina will no doubt testify, the Saudi Arabians have also got a lot better since then.