India to have its own Supercross Racing League

Pune, Nov 24: Supercross India Pvt Ltd under the aegis of the Federation of Motor Sports Clubs of India on Thursday announced the handing over of the Memorandum of Understanding (MOU) for the commercial rights to launch the world's first of its kind Supercross racing league, titled 'Indian Supercross Racing League'. 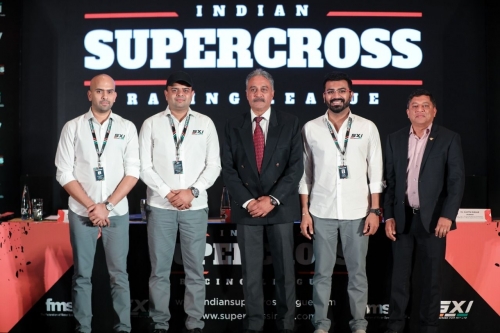 The MoU was handed over by Gautam Shantappa, Vice-President, and Sujith Kumar - Chairman of Supercross Racing Commission of the FMSCI to the promoters of the league in a press conference held in Pune.

"The federation fully backs the SXI team and firmly believes that they would take the sport forward and elevate it to a new level. As the vice - president, I am confident that SXI and the FMSCI will work as a team and would make the league a huge success," said Gautam.

Whereas, Sujith said, "I believe that with younger organisers coming into the sport the future looks bright. I would like to state that it's a matter of great happiness to see X-Racers coming back to the sport playing different roles. The federation fully backs the SXI team and firmly believes that they would take the sport forward and elevate it to a new level. I am proud to say that we in India have the first franchise-based Supercross league in the world."

The league will look at the development of the sport at a grassroots level and shall endeavor to bring India to the global forefront of motorsports.

India to have its own Supercross Racing League