Stories from innermost parts of India have a distinct appeal: Pushkar-Gayatri

Chennai, Nov 24: If entertainment preferences across India have undergone a sea change over the last few years, much of the credit goes to OTT platforms that are bringing interesting concepts. 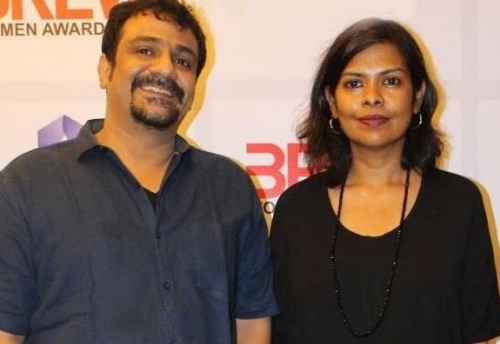 Prime Video's Tamil Original series- Vadhandhi - The Fable of Velonie set to stream from December 2, is based around the theme of rumours.

Produced by Pushkar and Gayatri under their banner Wallwatcher Films, the 8-episode series is created, written, directed by Andrew Louis.

Vadhandhi, which means rumours, delves into the world of young and beautiful Velonie, played by debutante Sanjana, whose story is riddled with rumours. A troubled but determined cop, played by S.J. Suryah, finds himself caught in the web of lies but is hell-bent on finding the truth.

Backing a series with such an unconventional theme, Pushkar and Gayatri elaborated on what intrigued them about it, "Watching a series is a form of tourism - very similar to how people travel or search online for imagery. In the past 2-3 years, hyper local content from down south has been travelling to audiences all over the country. Stories like Vadhandhi, which come from deep-rooted parts of India, have such a distinct appeal that entices us as well to come aboard and lend our support, experience and creative inputs."

Dissecting the premise, Andrew shared more about how he came up with this concept. "I was toying with the idea of Vadhandhi for a very long time. It's all the things that we come across in daily life, all the cases that we read about and the opinions that the public forms by what they consume on various platforms. For a very long time, I've been thinking, 'do we really get the entire truth, or do we only get a version of it? And in all of this, is the truth getting muddled?' These questions played on my mind, and this was the inception of this story. Over time, I gathered a lot of material, and then at some point I realized I have enough for it to be made into a series!"

The Amazon Original series stars the multifaceted film artiste, S.J. Suryah in his streaming debut. The series also marks the acting debut of Sanjana, who plays the titular role of Velonie, and features a stellar ensemble cast including Laila, M. Nasser, Vivek Prasanna, Kumaran and Smruthi Venkat in pivotal roles.

Stories from innermost parts of India have a distinct appeal: Pushkar-Gayatri

Second Project 15B guided missile destroyer delivered to Indian Navy
Rakshanda Khan: I've lost out on roles to people not necessarily on basis of talent but also budget