New Delhi, Nov 24: Increase in personal tax exemption and deduction limits and greater support for the exports sector were some of the key demands which were made before Finance Minister Nirmala Sitharaman by the trade and service sector representatives, who met her on Thursday as part of pre-budget consultations. 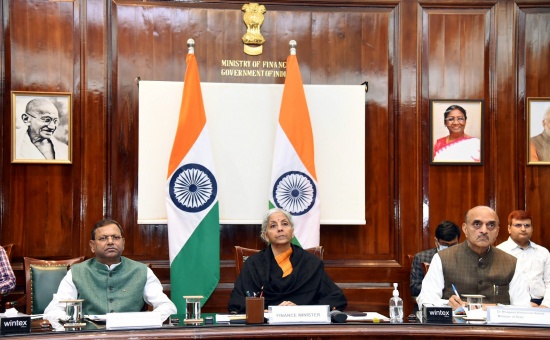 The Federation of Indian Export Organisations (FIEO) sought creation of a fund and availability of credit at affordable rates, while also urging the Finance Minister to extend greater support to exports which have become less competitive as rupee has steadily depreciated while the dollar has strengthened.

The Bengal Chamber of Commerce (BCC) sought streamlining of guidelines on search and seizure operations under GST, especially for established taxpayers.

Vivek Jalan, the Chairman of BCC's Fiscal and Taxation Affairs committee, put forth some key demands before the Finance Minister.

The BCC also sought clear standard operating procedures to provide guidelines as to when the inspection, search and seizure can be initiated under GST, especially for established taxpayers.

It also sought reduction in compliance burden on assessees by removing the requirement of issuance of TDS certificates and relying on Form 26AS which is an automated process.