Guwahati, Nov 24: In a bid to strengthen the Assam police forces, the Indian Army is imparting training to the 2700-odd new recruits in a 40-week programme. 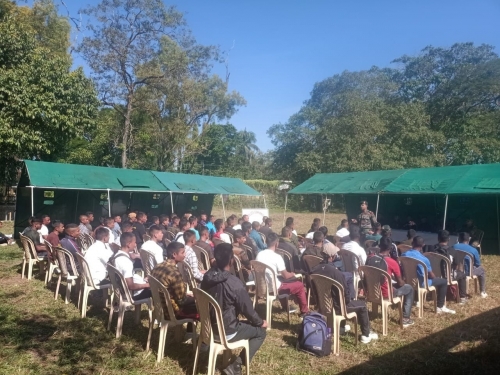 Defence PRO, Lt Col Mahendra Rawat told IANS that the training under the Indian Army commenced earlier this week at seven locations in Assam and Meghalaya. The training will be conducted in two phases - basic and advanced. The focus of basic military training is to make the trainees stronger both mentally and physically.

"In the advanced phase, trainees will be taught tactical combat skills as well as various policing aspects related to maintenance of law-and-order situations," he added.

The Army spokesperson mentioned that Assam police have been jointly operating with the Indian Army to bring peace to the Northeast region since the 90s. These joint operations have played a major role in bringing normalcy to a very large extent in the state.

Recently, the Assam government has recruited around 2,700 entrants, including more than 300 women, and raised five new commando battalions to strengthen the police forces.

Rawat said that the Indian Army has extended its assistance to train Assam police commando battalion trainees. This initiative will enhance synergy and capability to undertake joint operations between the state and armed forces.