OTT Preview: Viewers will be spoilt for choices with this weeks offerings

Mumbai, Nov 24: OTT content is growing from strength to strength in the age of the Internet.

With new shows and films dropping on the web space every day, the audience have an ever-growing pool of content at their disposal to choose from and satiate their taste buds as per the genre of their liking. 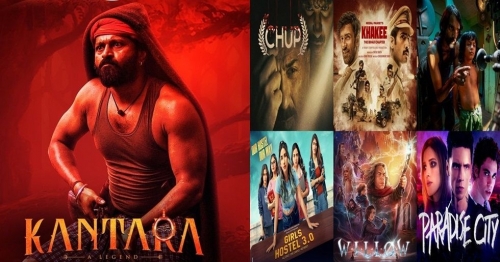 The upcoming OTT releases across platforms promise a wide range of content to consume and cherish for those, who like to watch content from the confines and place of their convenience.

1. 'Chup - Revenge of The Artist' Dulquer Salmaan's third Hindi film sees him playing the role of a serial killer with a warped mind, who goes on a killing spree of critics, who have panned his work.

The film pays homage to the late director Guru Dutt's film 'Kaagaz Ke Phool', a film that was severely criticised. The film is set to have its OTT premiere on ZEE5 on November 25 in Hindi, Telugu, Tamil, Kannada and Malayalam.

2. 'Khakee The Bihar Chapter' The Netflix crime series follows the tussle between two men on opposite sides of the law - one a dreaded gang lord and the other a fiercely upright Indian Police Service officer Amit Lodha.

It has been shot in extremely trying circumstances in Jharkhand and Bihar across multiple Covid waves, and boasts of a talented ensemble of Karan Tacker, Avinash Tiwary, Ashutosh Rana, Ravi Kishan, Anup Soni, Jatin Sarna, Nikita Dutta, Abhimanyu Singh, Aishwarya Sushmita and Shraddha Das. The show will drop on Netflix on November 25.

3. 'Kantara' The Kannada sensational hit, which is currently racing ahead of all Indian films at the box-office, has arrived on OTT to further its success. The visually stunning film vividly depicts the traditional culture of Bhootha Kola and delivers the subtle message of eco-conservation. The film is directed by Rishab Shetty and also stars him in the titular role. 'Kantara' released on Prime Video on Thursday.

4. 'The Guardians of the Galaxy Holiday Special' The new film shows the Guardians travelling to Earth in search of the ideal gift for Quill as part of their quest to make his Christmas unforgettable.

5. 'Girls Hostel 3.0' Living a hostel life is an experience like no other. Friends, fun, freedom, and feistiness are all hallmarks of living in a hostel. The upcoming season of the streaming show will take the viewers on a fun ride and explore the lives of the hostelites as they try to make their way around everyday challenges.

6. 'Last Film Show' India's official selection to the Oscars this year, earlier released in theatres on October 14. The film is now heading to OTT to further penetrate the audience base.

The Gujarati language film is a semi-biographical coming-of-age drama, written and directed by Pan Nalin. It follows nine-year-old cinema lover Samay as he moves heaven and earth in pursuit of his 35mm dreams, unaware of the heartbreaking times that await him. The film is releasing on Netflix on November 25.

7. 'Willow' The series is based on George Lucas' fantasy-adventure film of the same name, and follows the events after an aspiring sorcerer, played by Warwick Davis, is whisked away on a journey to protect an infant empress Elora Danan and vanquish the evil Queen Bavmorda from their world of Andowyne.

The story continues with Davis reprising his titular role, as he leads an unlikely crew of heroes in a bid to protect Andowyne from an even larger foe than they had imagined possible. 'Willow', which also stars Ellie Bamber, Ruby Cruz, Erin Kellyman, Tony Revolori, Amar Chadha-Patel, Dempsey Bryk, and Joanne Whalley, will begin streaming from November 30 on Disney+ Hotstar in English and Hindi.

8. 'Paradise City' The upcoming American action film directed by Chuck Russell and written by Corey Large and Edward John Drake, stars Bruce Willis, John Travolta, and Praya Lundberg is about the lead character Ryan Swan's (Bruce Willis) father's violent murder and how Ryan carves his way through the Hawaiian crime world to wreak vengeance on the kingpin he holds responsible for his father's death. The film is dropping on Lionsgate Play on November 25.

OTT Preview: Viewers will be spoilt for choices with this week's offerings